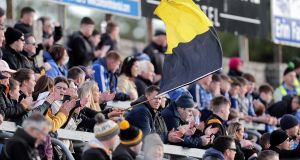 Cavan-based pharmacist Cian Murtagh says Covid-19 figures in the county are now “off the scale”.

“When you think about it, 80 cases a day in Cavan would be the equivalent of 1,200 in Dublin with the population 15 times higher there . We have a rough ride ahead”.

The Cavan man listened with dread to the latest figures from Northern Ireland on Wednesday as the tally of 1,217 cases was announced.

“There are a lot of people from the North working in Cavan, including some of my own staff,” he pointed out.

While speculation mounts about whether the Border counties will be moved to Level 4, Murtagh, like a lot of people in the county, was talking about the GAA and not proximity to the Border on Wednesday.

“A lot of people are annoyed with the GAA in Cavan,” he said. “They blame the surge on the celebrations following recent GAA finals.”

A keen GAA supporter himself, he says he understands the passion but reckons championships games, especially club finals, are bad news in the midst of a Covid-19 crisis.

“There is no problem with quarter-finals or semi-finals but when there is a cup on the table, there are going to be celebrations and that’s a problem,” he said.

Jimmy Fox who runs a shoe shop in Cavan town says it was irresponsible to have 32 club finals played around the country right at the time that colleges were reopening.

“I think that was a huge contributory factor to the surge,” he said.

It was a point repeatedly raised on the streets of Cavan town on Wednesday.

Many pointed to the recent senior championship final won by Crosserlough club for the first time in 48 years.

Fox says another lockdown is inevitable because “half measures don’t work”. He believes there is “resignation” in the town although he says he has witnessed older customers aging in front of his eyes since the Covid-19 crisis started.

“It has been absolutely dreadful for older people. They have lost their confidence and their sense of wellbeing. They have aged and they are in fear”.

While conceding that the Government is in “an impossible situation” he believes that as soon as they deviated from the advice of the medical experts figures rose dramatically.

“Tony Holohan said Level 5 and we did not do it and we are paying a price. We know what the answer is. I don’t want to close my doors but the only answer is lockdown”.

Pacelli Lynch of Easons in Cavan says he doesn’t think the existing Level 3 restrictions are being properly enforced.

“Some people coming in here just won’t wear a mask and if we say anything they say ‘medical’ which means absolutely nothing.”

He too singled out recent celebrations by GAA supporters as a significant contributory factor to the local surge.

“I think the GAA did fantastic work especially during the lockdown but I think the celebrations after county finals didn’t help.”

He worries about what Level 4 will mean for local businesses.

“I have to say our figures for August, September and October so far have been fantastic, well above last year’s, and I think that’s partly because people are buying early for Christmas but its also because our customers are going out of their way to support local shops.”

Eddie Coleman, a former Cavan Chamber of Commerce president and the owner of Cavan Gifts, says “none of us wants to see another lockdown” but “I would prefer to see it happen now than in December” which was a crucial time for businesses.