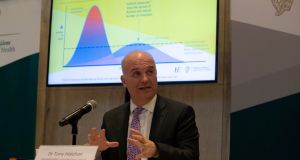 Chief medical officer Dr Tony Holohan: ‘We must remain focused in our shared efforts to prevent the spread of this infection.’ Photograph: Colin Keegan/Collins Dublin

A total of 14 people diagnosed with coronavirus have died in the Republic in the last 24 hours.

The highest daily toll since the start of the pandemic brings to 36 the number of people who have died of the illness.

As of 1pm on Saturday the Health Protection Surveillance Centre had been informed of 294 new confirmed cases of the virus, also known as Covid-19, bringing the total number in the Republic 2,415.

In Northern Ireland two more deaths have been confirmed bringing the region’s death toll to 15. There were 49 new positive cases reported on Saturday, increasing the total number to 324.

There have been 51 deaths on the island and the number of confirmed cases is 2,739.

All 14 deaths in the Republic were in the east of the country and the median age those who died was 81.

The HSE said it was now working to identify any people the patients may have had contact with in the past fortnight.

The most up-to-date, detailed data show that as of midnight on Thursday when there were 1,904 cases, just over half (53 per cent) were among males while 46 per cent were among females.

Of these 489 (26 per cent) required hospital admission and 67 of these had been admitted to intensive care. This figure has risen above 70 in ICU on Saturday.

The Thursday data showed 445 of the 1,904 were healthcare workers.

Where transmission method was known, community transmission accounted for 52 per cent; close contact for 23 per cent and travel for 25 per cent.

Dr Tony Holohan, chief medical officer at the Department of Health, said on Saturday: “Today, we have our highest recorded number of deaths so far. Our condolences are with the family and friends of all patients who have died as a result of Covid-19.

“We thank all citizens who have complied with restrictive measures, who continue to follow public health advice and remain concerned for those around them.

“We must remain focused in our shared efforts to prevent the spread of this infection, to prevent severe illness especially that which requires ICU admission and ultimately save lives.”

Deputy chief medical officer Dr Ronan Glynn said: “The Department of Health, HSE and our frontline workers will continue to take every action against Covid-19, but it is each and every one of us, individually, who has the power to reduce this threat. Stay at home, follow the advice and protect one another.”