President accuses some US states of making ‘inflated requests’ for ventilators

US President Donald Trump has warned that the next two weeks will be "the toughest" and that there will be "a lot of death" and that the government would be deploying thousands of military personnel to states to help them deal with the pandemic. 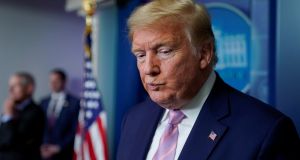 President Donald Trump reacts to a question during the daily coronavirus task force briefing at the White House in Washington. Photograph: REUTERS/Joshua Roberts

US president Donald Trump told Americans to brace for a big rise in coronavirus fatalities in the coming days as the country faces what he called the toughest two weeks of the pandemic.

The president faced criticism for initially playing down the risks of the coronavirus and has vacillated between warning Americans about its severity and complaining about its economic costs.

He pushed back on criticism the federal government has not done enough to get ventilators that many critically ill coronavirus patients need to survive to the states, saying some governors are asking for more machines than they will need.

“Fears of shortages have led to inflated requests,” Mr Trump said of submissions his administration has received to dole out equipment from the strategic national stockpile.

Mr Trump also repeated his support for a drug that is still being tested to treat the coronavirus, saying he might take the medicine himself and encouraging others with doctor approval to do the same.

Mr Trump’s optimistic comments on Saturday about the benefits of anti-malaria drug hydroxychloroquine to treat Covid-19, the disease caused by the coronavirus, reflected his tendency to put a positive spin on an issue even as data was still being gathered.

“I may take it,” Mr Trump said. “I’ll have to ask my doctors about that, but I may take it.” The president has been tested twice for the coronavirus, according to the White House, and both times the results were negative.

The European Commission said this week that the efficacy of hydroxychloroquine treating Covid-19 had not been proven.

Mr Trump said the federal government had 29 million doses of the drug and was adding to its national stockpile. He said he had asked Indian prime minister Narendra Modi on Saturday to lift a hold on a US order of the drug as well.

The US Food and Drug Administration has issued an emergency authorisation for the drug to be distributed from the national stockpile for doctors to prescribe to hospitalised Covid-19 patients, even as tests continue to be conducted and data collected.

The president, a Republican who is running for re-election in November, also praised Republican governors who have not issued “stay at home” orders for their states.

The United States has the world’s highest number of known cases of Covid-19, the flu-like respiratory disease caused by the coronavirus. More than 306,000 people have tested positive in the United States and over 8,300 have died, according to a Reuters tally.

White House medical experts have forecast that between 100,000 to 240,000 Americans could be killed in the pandemic, even if sweeping orders to stay home are followed.

In the grimmest day yet for New York state, the US state hit hardest by the pandemic, coronavirus-related illnesses killed 630 people in the last 24 hours, Governor Andrew Cuomo said on Saturday.

The disease has now killed 3,565 people in New York, and the situation is particularly worrying on Long Island, east of New York City, where the number of cases “is like a fire spreading,” Mr Cuomo told a news conference.

Health experts calculate that New York, home both to bustling Manhattan and hilly farm country stretching to the Canadian border, might be around a week away from the worst point in the health crisis which has killed about 60,000 people worldwide.

“We’re not yet at the apex, we’re getting closer . . . our reading of the projections is we’re somewhere in the seven-day range,” Mr Cuomo said.

“It’s only been 30 days since our first case,” he said. “It feels like an entire lifetime.”

New York City alone accounted for more than a quarter of the US coronavirus deaths tallied by Johns Hopkins University. Hospitals and morgues in the city are struggling to treat the desperately ill and bury the dead.

Due to the risk of infection, many people with critically ill relatives in New York City are unable to see their loved ones in their final hours.

The emergency stockpile of medical equipment maintained by the US government has nearly run out of protective garb for doctors and nurses.

Mr Cuomo announced that the Chinese government facilitated a donation of 1,000 ventilators that will arrive at JFK airport on Saturday.

“This is a big deal and it’s going to make a significant difference for us,” Mr Cuomo said.

The dispatch of the ventilators was a result of a conversation on March 27th between Mr Trump and Chinese president Xi Jinping, a source familiar with the discussions said.

Almost all Americans are under orders from state and local officials to stay home except for essential outings such as grocery shopping or seeing a doctor. – Reuters