Covid-19 restrictions in Europe: how does Ireland compare? 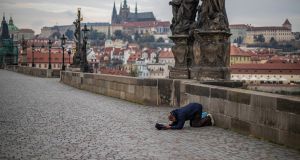 A man begging on an empty Charles Bridge in Prague. The Czech Republic has the worst infection rate in Europe. Photograph: EPA/Martin Divisek

Ireland and Wales have become the first in Europe to declare new nationwide lockdowns to cope with a surge in coronavirus infections following the easing of restrictions over the summer.

This week the Welsh government announced a two-week “fire-break lockdown” for all of Wales. From Friday people may leave home only for essential reasons. All but essential shops are closed, restaurants are takeaway only, and secondary schools are moving to online teaching.

Across Europe governments are increasing restrictions to try to rein in a surge in Covid-19 cases that the World Health Organisation has warned may overwhelm hospitals in a number of cities within weeks.

Governments are cautious of public weariness towards restrictions, and have so far tried to use local restrictions while shutting bars and restaurants, curtailing the sale of alcohol, and increasingly using curfews in a bid to find targeted rules that can bring down infection rates without blanket bans.

But the disease has continued to spread, and authorities in many countries are urging citizens to stay home where possible and to limit their contacts, warning that otherwise shutdowns like those seen in the spring may be on the way.

In the Czech Republic, which has the worst infection rate in Europe, schools have moved to online teaching, and the government has closed bars, swimming pools, gyms, theatres, cinemas and ordered restaurants to serve takeaway only and shut by 8pm.

Prime minister Karel Havlicek has said he would wait until next week before deciding whether to impose a full “lockdown” – a word that is used to describe very different situations throughout Europe.

In recent months local rules aimed at keeping citizens in their homes or in their neighbourhoods have been introduced in countries including Spain, Greece, Scotland and Wales.

On Tuesday the German region of Berchtesgadener Land on the border with Austria announced that schools and daycare centres would shut along with leisure facilities and restaurants, with citizens obliged to stay at home for all but essential reasons.

Since September authorities have asked residents in Madrid to stay at home and have increasingly curtailed movement, banning non-essential travel in and out of the worst affected neighbourhoods and enforcing restrictions on bars, restaurants, and social gatherings.

As of Thursday, non-essential travel is banned in and out of the northern region of Navarra. Bars, cafes and restaurants are to close, and other businesses shut by 9pm.

Likewise Paris shut all bars and cafes earlier this month. As of Saturday night the capital has been among nine French cities living under a curfew between 9pm and 6am. All residents must be at home or face fines, due to what prime minister Jean Castex described as a “spectacular acceleration” in Covid-19 cases that was already straining intensive care units.

Belgium also introduced its first national curfew since the second World War, confining citizens to their homes between midnight and 5am while closing all bars, cafes and restaurants and banning the sale of alcohol after 8pm.

Neighbouring the Netherlands has also shut bars and restaurants and banned the sale of alcohol after 8pm in what prime minister Mark Rutte described as a “partial lockdown”. Hospitals are prepared to send patients to Germany for intensive care due to a lack of space.

About 20 million people live under a 9pm curfew, including in Paris and Marseilles, while the capital has shut its bars and cafes.

Bars and restaurants are shut, a curfew is in place between midnight and 5am, the sale of alcohol is banned after 8pm, and citizens may have only one close contact outside their household.

Bars and restaurants are closed, and the sale of alcohol is banned after 8pm, with citizens asked to work from home and limit social contacts.

All schools have moved to online teaching. Bars, swimming pools, gyms, theatres, cinemas are shut, while restaurants are takeaway only and must close by 8pm.

Movement in and out of Madrid hotspots and the northern region of Navarra is banned in the latest of local restrictions that began during the summer and have since affected regions including Catalonia and Galicia.

Secondary schools have moved to online teaching, non-essential shops are shut, and citizens must only leave home for essential reasons.

Rules differ between Germany’s federal states, but Chancellor Angela Merkel has appealed to citizens to “stay at home where at all possible”. The Alpine region of Berchtesgadener Land declared a lockdown on Tuesday.

The region of Uppsala has asked citizens to avoid social contacts and public transport, the first region to tighten the rules after national authorities allowed localities to set stricter policy in a departure from the previous approach.

1 Astronaut Chris Hadfield offers to ‘talk space’ with Adam from the Toy Show
2 One man dies, five injured after partial building collapse in Tralee
3 Ireland in precarious position as third Covid-19 wave could be more deadly, Nphet warns
4 Covid crisis: Republic to move back to Level 3 as shops open from Tuesday
5 400 – yes, 400! – Irish retailers for all your online Christmas shopping
Real news has value SUBSCRIBE