‘We don’t think productivity is a big problem, but a sense of belonging is’ 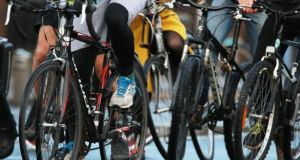 Providing commuting bicycles is one great way for employers to help their staff. Photograph: Nick Bradshaw

Not that long ago, I met a woman from one of the world’s best known companies who had just had some unpleasant news. She had been going into the office since the onset of the pandemic, unlike other managers who had been working from home.

One day, she came across a social media post that inadvertently revealed her head office was so pleased with its remote working experiment it had sent a lavish box of gift-wrapped delicacies to thank staff for their efforts.

There was just one problem: the woman, and all her colleagues who were also in the office each day, got nothing – except the urge to start looking for another job.

“It felt as if we were the coal miners trudging off to keep the show on the road while everyone else was sitting at home snacking on company treats,” she told me.

Her story was a reminder that there are two kinds of companies in this pandemic: those doing clever things to deal with the new world of homeworking and those that are not.

Here are five examples of the smart ones, and one more of the clueless.

The longer remote working goes on, the more that managers worry about how to stop staff feeling like unmoored onlookers sitting at home in their tracksuits. As one US executive said to me recently: “we don’t think productivity is a big problem, but a sense of belonging is.”

One solution for many companies: online staff town hall meetings with external speakers. My pick so far is Discovery, the South African insurance and financial services group. It has had an American astronaut talk about isolation and an al-Qaeda hostage discuss resilience. Jessica Ennis-Hill, the British Olympian, gave a live aerobics class and Mark Tucker, chairman of both Discovery and the HSBC bank, held forth on the future of insurance.

Not every company has the means or desire to arrange a big outside speaker but smart ones encourage insiders. At the UK’s NatWest bank, one worker has used the internal network to run bedtime story reading sessions for colleagues with young children. Another has held live DJ sessions at 5pm on Fridays to signal an end to the working week. It’s not for everyone but, if it helps anyone, it seems sensible to try it.

One increasingly popular way to help atomised staff feel connected is to help them upgrade their skills. At Swiss bank UBS, interest in online courses has been “huge” this year, says chief information officer Mike Dargan. The biggest hits: courses on neural networks and AI for everyone.

It has been a similar story at IBM, where staff can gain externally accredited qualifications in anything from blockchain to management.

Clever companies are also finding ways to add the breaks people take naturally in an office into a remote working day. I like the 25-minute “coffee chats” staff are encouraged to take at the software company, GitLab. There is no formal agenda and talk can turn to anything. New joiners are supposed to do at least 10. Again, it’s not for everyone but it will make sense for many.

There is another problem for employers worldwide: workers’ fear of using public transport to get to the office. In Milan, the Moncler fashion group is giving its 400-odd staff in the city personal use of a free bike worth about€400. More than 50 have taken up the offer so far.

Not all companies can afford to be so generous but Moncler does another, even smarter thing with its money. It offers virus testing to anyone returning to work from a holiday and those testing positive can have their whole family tested free of charge. That is not just reassuring for staff, it is good for public health, which leads to one of the least clever examples of corporate behaviour in this pandemic: gagging workers.

US workers have filed a series of complaints against employers they say ordered them to stay quiet about Covid cases. This is not just obnoxious, it is dangerous. The faster people learn about an outbreak, the faster it can be traced and contained. In the absence of a vaccine or drugs, that is what every employer needs, whether they are smart enough to realise it or not.

1 Three Ireland switches on 5G network around the country
2 Am I paying too much for my buy-to-let mortgage?
3 Mortgage breaks will not be extended beyond this week
4 Pilita Clark: The looming legal minefield of working from home
5 Chris Johns: Boohoo exposed on pay and conditions in digital economy
6 Motor tax hikes, D’arcy quits politics for IAIM, and Sprout’s takeaway pivot
7 High Court grants permission to pay €2.7m tax bill
8 New car prices could rise by up to €10,000 if taxes increase in budget
9 Me & My Money: ‘Money can’t buy you happiness but it can make life a lot easier’
10 Should I switch bank now with Ulster Bank at risk of closing?
Real news has value SUBSCRIBE