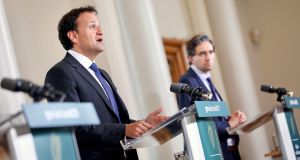 The HSE is to end its €20 million lease of facilities at the Citywest Hotel complex in Dublin which it had been using during the Covid-19 emergency.

Minister for Health Simon Harris said at a post-Cabinet briefing on Thursday night that the agreement would come to an end in October.

The Citywest complex, which has capacity for some 1,700 beds, had been available for self-isolation and as a step-down facility for Covid-19 patients.

The deal is expected to cost the HSE more than €20 million.

However, there had been concerns about the level of use to which the facility had been put. The Health Budget Oversight Group – comprising senior officials of the Department of Public Expenditure, Department of Health and the HSE – was told in early May that the occupancy rate at the Citywest Hotel complex was “currently low”.

Minutes from a later meeting in May noted “a growing number of questions regarding the occupancy rate of Citywest Hotel at the time and potential alternative uses for the facility”.

Mr Harris said he informed the Cabinet on Thursday that it was the HSE’s intention not to extend the lease on Citywest. He said the HSE will discuss in the coming weeks what to use the facility for.

Separately it has emerged that no further public patients will be admitted to private hospitals after next Tuesday under the agreement which saw the State take over their facilities during the Covid-19 crisis.

No subsequent follow-on agreement has yet been agreed. Private hospitals said on Thursday that talks with the HSE were continuing.

The Government decided at the end of May that it would not extend the current three-month agreement covering nearly 20 private hospitals for a further two months.

The Cabinet at the end of May decided to mandate the HSE to enter into talks on a new agreement with private hospitals to come into effect from July which would allow the State to take control of 100 per cent of their facilities if it was required to deal with any future surge in Covid-19 cases.

The Government also instructed the HSE to engage with the private hospitals to secure ongoing access to private hospitals in collaboration with the National Treatment Purchase Fund (NTPF) to address essential needs including delays in public patients obtaining treatment.

The association representing private hospitals said on Thursday that the current agreement between them and the HSE would expire next Monday.

“After that time we will see the recommencement of normal activity at all of the country’s private hospitals. Continuity of care will remain a priority for any remaining public patients still being treated or recuperating in private hospitals after this date and any transfer of care requirements will be carefully managed by way of locally agreed arrangements with the appropriate hospital group and public hospitals.

“No further public admissions will occur after this date under the auspices of the agreement which expires on June 30th.

“Talks are still ongoing between the Private Hospitals Association and the HSE in respect of future private capacity requirements in respect of Covid-19 over the medium and longer term.”

It is understood that the Government may seek to tackle the growing public hospital waiting lists – which will be exacerbated by the Covid-19 restrictions in the health system, where fewer procedures are likely to take place – by ramping up the operation of the NTPF in the private hospitals.

However, under the NTPF model, the State buys packages of care, including private hospital accommodation and treatment for patients by consultants. The State does not employ the doctors or hospital staff.