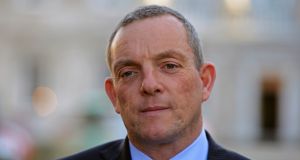 The Government needs to improve its communications on the vaccine rollout programme, the Fine Gael parliamentary party was told on Tuesday afternoon.

There is growing unease over the failure to publish daily counts of people being vaccinated, the meeting heard, with suggestions made that the HSE’s Covid-19 tracker app could be updated with a daily figure.

One source at the meeting said the issue “dominated” proceedings. “We’ve been promised the information would be provided, and it hasn’t to date, and it’s the 12th [of January],” a source said. “We need to pull our socks up on that”.

Richard Bruton, the Fine Gael party chairman, said afterwards that there had been “good suggestions for improving communications”, and there had been a welcome at the meeting for a recent announcement that the programme is to be accelerated.

Tánaiste Leo Varadkar told the meeting that the situation in hospitals is going to “be very difficult for the next few weeks”, and blamed the rise in case numbers on multiple factors – these included house parties, hospitality, the UK variant of the virus, inter-county travel, people not isolating after travelling into the State and illegal gatherings such as shebeens.

The decision was taken at the Fine Gael parliamentary party meeting to restore the whip to Jerry Buttimer, Paddy Burke and John Cummins.

Mr Varadkar removed the whip from the three Senators after they attended the golf society function, which sparked a major controversy culminating in the resignation of Minister for Agriculture Dara Calleary and European Commissioner Phil Hogan.

However, on Tuesday afternoon – as the Government was launching the report of the Commission of Investigation into Mother and Baby Homes – Mr Varadkar proposed that the three be readmitted to the party.

Sources at the meeting said there was no debate following the proposal, which was unanimously agreed.

In a statement, Mr Varadkar said: “At the start of a new Oireachtas session I think it is time to readmit Senators Jerry Buttimer, Paddy Burke and John Cummins back into the parliamentary party.

“They all acknowledged that what happened at the Oireachtas Golf event should not have happened, apologised and took responsibility immediately.

“They have been out of the parliamentary party for five months and it’s time for them to get back to working with us across the whole range of Oireachtas work, including relating to battling against Covid.”

Fine Gael did not immediately respond to a request for comment on why the motion had been moved at the same time as the report launch.

A Fianna Fáil spokeswoman confirmed that a proposal to readmit the three senators it removed the whip from – Paul Daly, Aidan Davitt and Niall Blaney – for their attendance will be on the agenda for its party meeting on Wednesday.