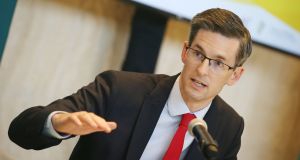 The public should be wary of “assuming” people with foreign accents were tourists visiting the country from abroad, the State’s acting chief medical officer has said.

There has been heightened concern in recent days over incoming flights from the US, and anecdotal reports of tourists failing to quarantine for 14 days as required upon arrival in Ireland.

Speaking on Monday, acting chief medical officer Dr Ronan Glynn said people should not assume “that an accent is necessarily associated with a tourist from any particular country”.

“Clearly there are people of all nationalities working in this country, and we need to be very careful that people don’t make inappropriate or incorrect assumptions,” he said.

There were no additional coronavirus-related deaths reported on Monday by the National Public Health Emergency Team (NPHET) for the second day in a row. There were 11 further confirmed cases, bringing the total to 25,638. There have been 1,746 deaths from Covid-19 in the State to date.

Dr Glynn cautioned against assuming NPHET would recommend moving to the final phase of the country’s reopening on July 20th, under which all pubs can resume trading. “I think we are concerned about the increase in cases over the last five days,” he said.

There have been 99 additional cases in the last five days, as the country continues to reopen from lockdown. “We’re not sounding an alarm but we’re certainly watching this really, really closely,” he said.

Echoing comments from Minister for Foreign Affairs Simon Coveney, Dr Glynn said “now is not the time to travel to Ireland”, adding Irish people should also not travel abroad unless “absolutely necessary”.

Reports of tourists failing to quarantine upon arrival in Ireland were a “concern,” he said. From a public health perspective, a “mandatory quarantine would clearly be a desirable measure”, but the Government had to account for other factors, Dr Glynn said.

NPHET’s message to tourists arriving in the country would be: “Stay in your hotel, or your guest house, now is not the time to be exploring Ireland,” he said.

Given the pandemic was expected to last for at least a number of months, it was not feasible to “shut down travel completely” in and out of the country, he said.

Health officials had seen a number of clusters linked to house parties and private homes in recent weeks. There was also concern that growing numbers of people identified as close contacts of confirmed cases were refusing to present for testing.

“We know a significant portion of people who have been identified as contacts are not coming forward for testing,” Dr Glynn said.

The median age of the 165 confirmed cases in the last two weeks was 31, with just under half of those occurring in Dublin. Some 12 per cent of these new cases were travel-related.

There has been no increase in the number of cases or clusters associated with at-risk groups, such as the Traveller and Roma communities, those in homeless and addiction services, or direct provision centres. Two clusters in workplaces had accounted for 18 cases in the last week, officials said.

In Northern Ireland, the Department of Health reported one additional coronavirus death, bringing the number of deaths in the North to 556. The department also recorded 16 new cases of Covid-19 in the North, taking the total number of confirmed cases to 5,788.