Trial, involving 44,000 participants, was largest trial of a Covid-19 vaccine 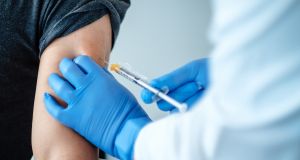 The Pfizer and BioNTech trial shattered all speed records for vaccine development. Photograph: BioNTech via The New York Times

Irish clinical trials group Icon has revealed that it carried out the late-stage trial of the Pfizer-BioNTech coronavirus vaccine.

The trial, which involved 44,000 participants over a four-month period last year, was the largest trial of a Covid-19 vaccine.

Pfizer and BioNTech were the first to announce positive efficacy results from a late-stage study, and the first to receive authorisation for deployment.

Dublin-based Icon, one of the largest clinical research groups in the world with more than 15,000 staff, said it mobilised “a large global team of therapeutic and operational specialists” to partner on the implementation of the Pfizer-BioNTech programme.

Icon was precluded from revealing details of its role in the trial until now for commercial reasons.

The company said the trial was conducted across 153 sites in the US, Europe, South Africa and Latin America against “unprecedented trial timelines”.

“We are proud to have supported Pfizer and BioNTech on one of the largest and most expeditious randomised clinical trials ever conducted, and to have helped accelerate their mission to develop the world’s first safe and effective investigational vaccine for Covid-19,” Icon chief executive Steve Cutler said.

“Through close collaboration with Pfizer and BioNTech, we used a full suite of innovative approaches and technologies to support achieving fast site activation, patient recruitment and remote and on-site monitoring, which enabled us to meet accelerated study timelines on the way to delivering high quality data for regulatory approval,” he said.

Mr Cutler said the trial has redefined industry expectations in terms of trial management and speed, while never compromising safety, quality and integrity.

The European Commission is in discussions with Pfizer and BioNTech about the possibility of ordering more doses of their Covid-19 vaccine, in addition to the 300 million shots already covered under an existing contract, a spokesman said on Monday. Based on its population share, Ireland is in line to receive more than two million doses of the vaccine.

“The commission is checking with the companies whether there is a way to add additional doses to those for which we already have a deal,” the spokesman told a news conference. He declined to answer a question on whether a German deal for more doses of the same vaccine could clash with possible new orders by the European Union.

The EU is distributing jointly procured vaccines on a pro-rata basis to the 27 member states based on their populations. The bloc has already ordered 200 million doses of the Pfizer-BioNTech vaccine and has taken up an option to buy another 100 million under a contract signed with the two companies in November. The Pfizer-BioNTech vaccine is the only one to be authorised in the EU so far. It has been reported that the EU drugs agency is to bring forward its approval of the vaccine developed by biotech firm Moderna, which had been scheduled for January 6th. - Additional reporting: Reuters

One year on: Wuhan is now a source of pride for China but many remain wary