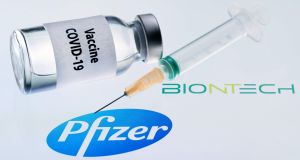 The Covid-19 vaccine being distributed in Ireland and across the EU is likely to be effective against the new mutation detected in the UK - or can be adapted quickly.

That was the message of BioNTech chief executive Ugur Sahin at a press conference on Tuesday as lorries carrying his company’s vaccine fanned out across Europe.

“We have already tested the vaccine against around 20 other viral variants with different mutations,” said Dr Sahin. “The immune response elicited by our vaccine has always inactivated all forms of the virus.”

Within two weeks he said his firm will know for sure if the vaccine is effective against the variant known as VUI-202012/01, first detected in the UK in September and now responsible for more than 60 per cent of infections in London.

The company, based in Mainz near Frankfurt, uses in its vaccine an antigen consisting of more than 1270 amino acids. Of these, nine have mutated in the new variant, he added, or less than one percent.

“Our vaccine sees the whole protein and causes multiple immune responses, this gives us so many docking sites that the virus has a hard time escaping,” he said. “But that doesn’t mean the new variant is harmless.”

Should changes be required, the BioNTech vaccine is based on the mRNA messenger molecule which can be adapted easily for new virus variants. An updated vaccine, he added, could be ready for approval within six weeks.

The BioNTech/Pfizer vaccine is said to have an efficacy of more than 90 per cent. Should the new variant of the virus become more efficient at infecting people, Dr Sahin said it was possible that a higher vaccination rate - beyond 70 per cent - would need to be achieved to allow life return to normal.

Working with US pharmaceutical giant Pfizer, the German drug company is confident it can meet global demand for its vaccine. They are already contracted to produce 1.3 billion doses but will know early in the new year about its ability to increase production capacity.

Pfizer is producing the vaccine at four sites, three in the US and one in Europe, while BioNTech operates two manufacturing sites. Both companies are seeking additional production facilities to boost capacity.

Germany’s infectious diseases body said on Tuesday that it was “very, very likely” the new strain is already circulating in Germany, given cases have been detected in neighbouring Denmark and the Netherlands.

Meanwhile Switzerland is trying to track around 10,000 British citizens who landed on 60 flights over the weekend. Fears are growing that some may be carriers of the new strain and are now on the country’s ski slopes, using ski lifts and public transport. Unlike neighbouring France, Germany and Austria, many of Switzerland’s major ski slopes opened last week.