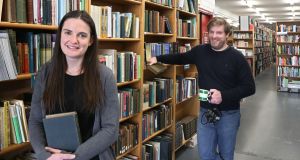 Sarah and Tomás Kenny in Kenny’s Bookshop, which reopened to the public on Monday. Photograph: Joe O’Shaughnessy

The first customers began to walk into Kenny’s Bookshop a few minutes after it opened its doors on Monday for the first time in three months. It has been a strange and revelatory period of business for the Galway family business which has become an institution since it was set up 80 years ago.

After six decades on the high street, the book shop and art gallery has been located in the Liosbán retail park since 2006. Online sales have become a significant aspect of its business and almost as soon as the national lockdown took effect, staff began noticing some interesting trends.

“As soon as we closed the door, our library business stopped because all the university libraries closed at the same time,” says Sarah Kenny. “But at the same time, our online orders went up almost overnight. Fiction was the absolute biggest increase. Everything from current best-selling fiction to a lot of classics.

“Books that people had maybe intended to read someday but never got around to. So there was big demand for titles like Ulysses or War and Peace and Jane Austen’s novels and Wuthering Heights.

“And then we also had a lot of sales in self-help books, gardening, grow your own fruit and veg, and teach yourself DIY. The non-fiction market, which is usually steady, was not as popular. So people wanted this bit of escapism.”

Six of the 16 staff continued to work in the shop preparing items for delivery and answering phones. More than ever, that became important. “Elderly people who were isolating and feeling lonely and were just happy to have someone to speak with on the phone and have a book posted to them.”

The majority of online orders came from within Ireland – it helped that Kenny’s offers free nationwide delivery. And they began to get the same message from customers. “People were saying: I want to support Irish and to try and keep businesses going. So if people do think twice now about where they shop, it will be a positive thing.”

Kenny’s has more than a million books in its reserve. Operating in the shadow of gargantuan online presences like Amazon requires versatility and customer loyalty.

Tourists remain a big part of the walk-in custom and like every other shop opening on Monday, Kenny’s is uncertain as to how busy it is going to be – and how quickly. The shop is fortunate in that the floor space is vast so overcrowding won’t be an issue. But the old luxury of wandering through the corridors of books and browsing and reading dust jackets is not as straightforward anymore.

“I think people are worried if they can pick up a book off the shelf,” says Ms Kenny.

“No more than going into a supermarket, you might pick up a product and put it back because you don’t want it: you have to be able to do that. It is impossible to have a customer experience and not be able to lift the books and browse and put them back.

“We can comfortably have people here social distancing and we advise customers to use the hand sanitisers when they come in. And I think customers play a role too in being safe themselves.”

Séamus Woulfe: The last man standing in Golfgate is set to learn his fate