What do you do if your Olympic dream was within reach?

Triathlete Carolyn Hayes had her eyes set on Japan, but before that could happen, the world closed down 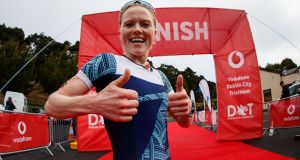 We’ve all had to make sacrifices in during the coronavirus lockdown, but what do you do if your dreams were within reach?

Someone getting used to making big sacrifices is triathlete Carolyn Hayes. Securing a second place in a race in Mauritius in March, her first race in six months, due to injury, kept her on course for Olympic qualification, and another three races culminating with a top-eight performance in Brazil would have sent her straight to Japan, but before that could happen the world closed down.

“With the lockdown it’s really hard, but it’s hard on everyone and you just have to remember that you’re saving lives by doing very little,” she says.

With “something bigger than sport” at play here there is one really tough choice she had to make.

“Yeah, I’m pretty much wrapped in cotton wool from here to the Olympics,” says Hayes, a qualified doctor who’s put her career on hold to become an Olympian. “If I was in the hospital now, I’d be signing up for every 24-hour shift - I know I’d get sick. I’m all in or nothing. I’m either 100 per cent being a doctor and I’m practicing medicine or I’m 100 per cent focused on going to the Olympics, and I find that you can’t be everything to everyone.”

Hayes put sport aside while she finished her studies, but time waits for no one and the Olympics are not just a pipe dream, they are well within reach. “I know that I’m going to be a great doctor in the years to come but at the minute, that’s not my priority.”

The road to the Olympics is not a cheap one, so giving up her full-time job meant that sponsorship has been an important part of the process and she’s been lucky to secure the support of sponsors Renault Ireland, Specialized Ireland, William Fry, The Happy Pear and Asics, which admittedly give us a lot of envy on her social media accounts. I mean, have you seen that bike?

So, with it being the same goalpost just a longer pitch to run down, what was her reaction to the Olympics being postponed the full year?

“When it was initially postponed and we had no date I felt a bit lost and obviously, you know, everything I’ve done in the last 18-20 months, with HupHup, my coaches, Eanna McGrath and Gavin Noble, had been totally leading up to Tokyo 2020 but I am delighted that it’s going to be a summer games. I was initially apprehensive about it being a spring games, the temperature is a lot lower, which means it would have been a wetsuit swim.”

Given the heat and humidity the athletes will suffer in late July/early August you’d be forgiven for thinking that someone from this fair isle might prefer a slightly cooler temperature but “performs well in heat” is a skill Hayes has form for. “I cope very well with the heat for a small little white Irish girl. I think my size is definitely an advantage at least, not having much muscle mass and just being small in general.”

It’s a complicated business qualifying for the Olympics not only do you, of course, have to be exceptionally good at your sport but you also need to know how to prepare yourself through your qualifying races to gain the right amount of points while not hitting your peak. It requires knowledge, understanding, experience, patience and metrics . . . there are lots of metrics.

“We had planned on going to Brazil (in April) for the last race,” explains coach McGrath, “that’s a very hot race and Carolyn’s very good in the heat, smaller athletes can be better in the heat, we’ve a heat chamber we train her in. The Brazil race is hilly, and her small body size is more favourable for climbing and it was an Olympic distance race.

“Gavin and I would typically sit down look at the race calendar, and we’d have a priority race and secondary race and a tertiary race - all with points and our strengths in mind.”

With the full year away, it will probably require building up the points to qualify again but McGrath is confident it won’t be an issue for Hayes. “We assume, and know, she’ll be a better athlete next year - she managed to qualify this year, she’ll qualify next year. In some ways I’d actually look at this as a positive move as long as everyone doesn’t mind putting in another year of seeing each other every day! We’ve only had 18 months to work with her (she was a successful age group athlete when she joined HupHup) so in my mind, if we now have two years or two and a half years to develop her that’s a good thing.”

A situation many athletes are finding themselves in, at the moment, is they are all tuned up but have nowhere to spend the fitness they have in the bank something Hayes can advise on having been so close to her peak condition.

“Now you’re trying to get back into training shape because there’s a fine line when you’re in elite sport, everything is on the rivet,” says Hayes. “For me it’s an opportunity to keep working on the things I need to work on - I’m by no means the finished package - actually, that’s something that Eanna and I always talk about. This is an opportunity to work on little things that I might have had to rush, coming back from injury - I’d have given anything to have this time before Christmas.”

If you are in the unfortunate position where you’ve spent the last year of your life mentally and physically preparing for the race of a life time, only to find it’s not happening, the temptation might be there to try and maintain the same level of training for fear of losing fitness or perhaps the pressure has all gotten too much and you want to throw the towel in completely.

“My advice would be, not to continue trying to get the endpoint of your training, take a bit of pressure off, but stay training on a daily basis,” says McGrath. “It’s good to get out of the house if you can stay within your radius and it’s good to train on turbo at home.”

HupHup’s athletes ordinarily do a good amount of their cycle sessions on the turbo (indoor cycling), the coaching team have added some plans to Training Peaks to help keep you in shape. “You don’t need to do a huge amount of training to maintain fitness - keep a healthy mind and maintain consistent training, albeit in a reduced manner.”

“You just need to play the long game like myself”, adds Hayes, “and focus on positives, have little mini goals, because no one knows when we’re going to get back racing but the key is, that when you do get back, you’re ready. ‘Stay ready’ is something that Gavin always says.”

‘When you’re beautiful, other women absolutely despise you’
8