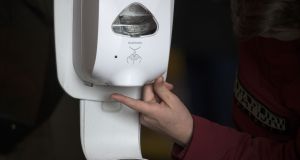 Members of the public have been advised to stop using all Virapro-branded sanitary products after it emerged that several are not authorised for use in the State. File photograph: Dave Meehan/The Irish Times.

More than one million units of a brand of hand sanitiser that is no longer authorised for use in Ireland were distributed to health service facilities across the State.

The ViraPro-branded hand sanitiser was found to contain methanol rather than ethanol and the Department of Agriculture has advised the public to stop using it and the company’s other products.

Inadequate levels of ethanol render the product ineffective and frequent use of sanitiser with methanol can cause nausea, dermatitis, eye irritation, upper respiratory tract irritation and headaches, it said.

A number of schools were forced to close on Friday as a result of the recall as the product had been sent to education centres across the State for use by students and staff.

The Health Service Executive (HSE) on Saturday confirmed that it had taken delivery of more than three million units of ViraPro’s sanitiser for use in health settings. Two million of these were in storage and more than a million have been “issued to health service locations”, it said.

A HSE spokeswoman said a product recall team had been mobilised and that it had “immediately quarantined all stocks currently held in the National PPE Distribution Centres”.

The recall would assist in understanding and establishing “how much product needs to be uplifted and replaced”, she said.

She said there was “ample stock available” in HSE storage to replace the recalled sanitiser.

Minister for Agriculture Charlie McConalogue said a potential problem with the sanitiser was first raised on September 25th. He said Revenue notified the department that the European Anti-Fraud Office had contacted it about the importation of a hand sanitiser from Turkey to Ireland from the same supplier of a product tested in Denmark and found to contain excessive levels of methanol.

He said the results of tests the department carried out were fully validated on October 16th.

The Department of Education has acknowledged that it was first alerted to safety issues with the hand sanitiser on Tuesday. However, schools were not told to stop using it until late on Thursday.

The Department of Agriculture said, in the course of the investigation into the hand sanitiser, it emerged that a number of other sanitary products under the ViraPro brand were not on its approved list for biocidal products.

“The company concerned has been advised to withdraw all of these products from the market,” it said in a statement. “Members of the public are advised to stop using these products because they are not authorised for use.”

Minister of State Colm Brophy told RTÉ’s Saturday with Katie Hannon that Ministers should have been informed sooner about the issue.

Asked if he was shocked at the delay, given the product was being used by children and millions had been spent on it, Mr Brophy said the Government was dealing with an unprecedented pandemic and that there was “so much happening at such a speed”.

He said it would have been better if the issue had been communicted sooner but that the Department of Education moved “as fast as they could” after being notified.

Sinn Féin health spokesman David Cullinane said it was worrying that a product being used to protect people was not safe and that the delay in informing the Minister was “unacceptable and speaks to the chaos we have here at the time”.

The HSE spokeswoman said it “moved immediately” to deal with the matter when it was informed by the department on Thursday that ViraPro products had been removed from the Biocides Product Register.

She added that the department further advised late on Friday of the need to withdraw “all products bearing the ‘ViraPro’ name and return to the supplier”.

“Whether it’s schools or hospitals, everyone has been struggling to access sufficient supplies of what we need but that has improved over time,” he added.

“We need to recognise that there is a need to focus on safety but also how important hand sanitiser and hand washing is.

“It’s an unfortunate hiccup that has had a severe impact on schools...The majority of hand sanitiser won’t have this particular type of alcohol.” - Additional reporting - PA

Life under Level 3: What stays open and where can I travel?

Covid-19: Trudeau expects most Canadians to receive vaccine by September 2021