Over 30 people from ‘different parts of the country’ who went to Killarney are now being traced, GPs told 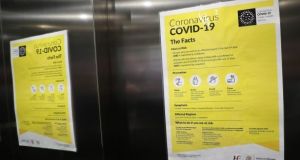 ‘While most of the cases reside elsewhere in the country, a number live in the HSE-South region,’ GPs were told.

A cluster of Covid-19 cases among a large group of young people who “partied” in rented accommodation in Killarney last weekend is being investigated by public health officials, GPs have been advised.

Over 30 people travelled from “different parts of the country” to Killarney and stayed a number of days together, according to a letter sent to general practitioners throughout the region on Friday.

The letter to GPs comes on foot of mounting reports in the area, and on social media, of a group of people from Dublin who arrived on Thursday of last week and of a large party in a house on Saturday night last.

There have been claims that a person in the group had tested positive for Covid-19 but this was not revealed to others until Sunday.

There were initial reports that some of the group had socialised in pubs in the busy tourist town.

However , Consultant in Public Health Dr Margaret B. O’Sullivan in her letter to health practitioners says “the current information” was the group of “30 plus people essentially stayed together partying in their rented accommodation.

“A cluster of Covid-19 cases is currently being investigated among a group of 30-plus young people who travelled from different parts of the country to Killarney last week and stayed together for a number of days there,” Dr O’Sullivan told GPs in the HSE South region.

“Our current information is that this group of young people essentially stayed and socialised together – having house parties in their rented accommodation but not attending any other congregate settings like pubs.”

The majority travelled to and from Killarney in cars. However one person used public transport and this was being followed up, Dr O’Sullivan said.

“While most of the cases reside elsewhere in the country, a number live in the HSE-South region,” she said.

Enhanced vigilance with regard to young people partying and Covid-19 transmission risk was underscored, the GPs were told.

A low index of suspicion among young people was urged “especially in this phase of the country’s reopening, based on current national trends and by this cluster in particular,” the consultant advised.

Pressed during the week by media, amid persistent reports, and concern, the Department of Public Health on Tuesday said in a statement that persons with Covid-19 in the Kerry Cork region in recent days had been identified and traced.

Friday’s letter to the GPs appeared to contradict this earlier stance, confirming the arrival of the large group of young people and the house parties and saying that the persons were still being traced and followed up.

The letter states: “Close contacts are being followed up and advised, and are being referred for testing. Several Departments of Public Health in other HSE areas are involved.”