Coronavirus: Delays in testing and tracing are the real problem

Analysis: Average wait of up to a week for results undermines effectiveness of strategy

There are now about 40,000 people in Ireland waiting for a test for the coronavirus, the HSE said at a briefing on Sunday. 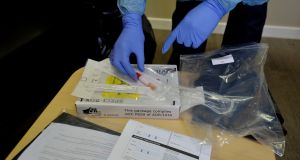 People understand how difficult it is to suddenly scale up supply to meet demands in a crisis such as this. But they want the truth about testing. File photograph: Alan Betson

The news that 40,000 people across the country are waiting for a coronavirus test will come as no surprise to doctors and commentators who have been saying for days that long delays were occurring in the system.

The HSE is now acknowledging people are waiting an average of four to five days to get tested; add in at least another two days for the swabbed sample to be processed and results reported back to the patients, and that gives an average delay of a week.

This is bad news for a system allegedly following the World Health Organisation advice to “test, test, test”. It is also of concern that it has taken so long for the system to admit to the delays, after journalists were last week being fobbed off with non-specific answers to their questions.

It bears repeating; the public wants the truth, and their trust will be compromised without it. People understand how difficult it is to suddenly scale up supply to meet demands in a crisis such as this. They understand that countries all over the world are competing for the supplies of testing equipment and personal protective equipment that are available.

They recognise the great efforts that have been made to ramp up supplies, and to pay for them. Yet the numbers barely add up; the HSE says 40,000 kits are being distributed now, with a further 20,000 to come during the week and talks ongoing about a supply of 100,000 kits a week from China. This is to clear the backlog, perform 4,500 tests a day and meet the inevitable increase in demand as contacts are traced and people fall ill.

People waiting to be tested should self-isolate and, if their condition worsens, get medical help. To that extent, they aren’t greatly affected by the delay, aside from the stress caused by waiting.

The real problem is that the delays in testing are causing knock-on delays in contact tracing, the other essential element in the two-pronged approach used by Asian countries to successfully tackle their epidemics.

In one large Dublin hospital last week, 100 nurses and 30 doctors were unable to work due to being in self-isolation

When a person tests positive, we urgently need to contact anyone they have been in close contact with, so they can modify their behaviour and remove the risk of further transmission. But if we’re coming at this a week late, those contacts of the “index” case may themselves have shed the virus and infected others by the time the contact tracers knock on their door. There may also be problems around properly remembering who you were in contact with a week earlier.

Although healthcare workers are supposed to be prioritised for testing, they have also been affected by the delays. This means more of them spend longer unavailable to work in the health service, due to the requirement for self-isolation, separate from the general issues outlined above.

In one large Dublin hospital last week, 100 nurses and 30 doctors were unable to work for this reason, and delays most probably were responsible for many of these absences. This situation is disturbing now, but will be completely untenable when the surge properly comes.

Testing is not the only part of our response showing early strain. The supply of PPE or personal protective equipment and oxygen is an issue for many medical professionals in many parts of the country. Again, people understand the difficulties involved in ramping up orders when international demand is soaring.

The experience of China shows equipment needs to be directed to where it’s most needed. Can we do this successfully in our fractured health system, traditionally full of sectoral fiefdoms and rivalries? Who, in this “war”, carries the clout to order hospitals to redirect equipment to other hospitals, or to get them to take in patients when they feel they are already overloaded?

We are told the Taoiseach is in overall command of Ireland’s response to the virus, also known as Covid-19, but what is the chain of command below him? Who will be the deliverer of bad news? The person making unpalatable decisions? The clinical leader rallying battle-weary doctors and nurses? More clarity and clearer leadership on this would be welcome.

The weekend has been dominated by discourse about a minority of people not observing social distancing rules. In reality, we are more likely to need a lockdown as a result of misfiring testing and contract tracing systems than because people chose to take walks on beaches and in parks.

1 ‘Frustrated and angry’: Thousands march in Dublin to protest death of George Floyd
2 Coronavirus: One more death in Republic as expert warns house parties are ‘disaster’ for containment
3 Covid-19: Easing of restrictions ‘unlikely’ to be speeded-up
4 Couple injured in shooting incident at farm in Co Waterford
5 US: Trump threatens to deploy military to end protests
Real news has value SUBSCRIBE