Trump predicts US death toll from Covid-19 could reach 60,000

Fatality rate in US ‘very low compared to other countries’, president claims 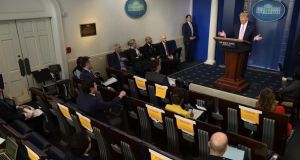 President Donald Trump told a White House briefing that he would be announcing the formation of a task force next week to look at ways of reopening the US economy. Photograph: Alex Wong/Getty Images

US president Donald Trump predicted that the death toll from coronavirus in the United States could reach 60,000, noting that the figure was “substantially” lower than the minimum figure of 100,000 estimated last month.

Speaking at the daily White House coronavirus briefing, on a day when global deaths from the virus passed 100,000, Mr Trump claimed the fatality rate in the US was “very low compared to other countries”.

The president said that “in the midst of all this grief and pain” there were positive signs that the country was nearing the peak of cases. Much of this was due to his administration’s “aggressive strategy”, he said. “We are saving so many lives compared to what it could have been.

“Nationwide the number of new cases is flattening substantially, suggesting we are nearing the peak and our comprehensive strategy is working,” he added.

Amid reports that the president was considering reopening the country as early as May 1st, Mr Trump insisted he would listen to the health experts before making a decision. He said he would be announcing the formation of a task force next week to look at ways of reopening the economy.

“I want to get [the country] open as soon as possible. This country was meant to be open, to be vibrant,” he said.

A decision on continuing funding the World Health Organisation (WHO) would also be made next week, he said, as he again accused the United Nations body of being too China-centric.

Mr Trump was speaking as the death toll in the US from coronavirus reached 18,000, while more than 475,000 cases have been reported. The US now has the second-highest death rate from the virus after Italy.

Worldwide, the death toll from the virus passed 100,000, according to Johns Hopkins University in Baltimore, Maryland.

Earlier on Friday, Mr Trump took part in an Easter blessing in the Oval Office with Bishop Harry Jackson, who read passages from scripture to mark Good Friday.

The president – who last month predicted that the US would be opened by Easter Sunday – thanked Americans for their prayers.

“Though we will not be able to gather together with one another as we normally would on Easter, we can use this sacred time to focus on prayer, reflection and growing our personal relationship with God – so important” he said.

“I ask all Americans to pray that God will heal our nation, to bring comfort to those who are grieving, to give strength to the doctors, nurses and healthcare workers, to restore to the sick and to renew the hope in every person who is suffering. Our nation will come through like never before.”

In New York, hundreds more people died from the virus, with the state registering 777 new deaths on Friday. But governor Andrew Cuomo pointed to positive signs, noting that the number of patients in intensive care units had fallen “for the first time since we started this journey”.

The total number of deaths in New York is now approaching 8,000. Mr Cuomo highlighted the need for more testing and called on Mr Trump to use the Defense Production Act to compel companies to produce more badly-needed equipment.

“If I had the Defense Production Act in the state I would use it,” he said, arguing that private companies would not produce sufficient quantities of the equipment without the president’s intervention.

Mr Cuomo also said he agreed with Mr Trump’s questioning of how the virus had developed so quickly, though said he did not know if the WHO was to blame as Mr Trump had suggested this week.

“How did this happen?,” he said at his briefing. “Because the warning signs were there. If you don’t know the answer, how do you know it’s not going to happen again?,” he said, noting that there were “questions and warnings” in January.