Coronavirus craft: ‘The virus is so beautiful and so sinister’ 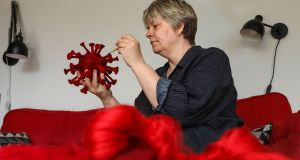 Sculptor and artist Annika Berglund: “The virus is consuming us all now.” Photograph: Crispin Rodwell

Annika Berglund finds she has a lot of time on her hands at the moment. So what better to make than a Covid-19 sculpture out of wool?

“The virus is so beautiful and so sinister,” says the Co Dublin-based artist who intends to make another seven virus pieces and enter them in the knitting and stitching show planned for the RDS in November.

Ironically, the theme of the show was already decided – “Endangered”.

“I was making frogs for my entry, but the virus is consuming us all now, so I switched my focus,” says Berglund, who lives in Blackrock with her 12-year-old daughter Sophia.

Her husband died three years ago of Non-Hodgkin’s lymphoma and she is thankful he is “not in hospital now”.

“I could not imagine how it would feel not being able to visit him and all the worry since he had such a low immune system. Obviously I am not happy that he is dead, but I am relieved he does not have to cope with this on top,” she said.

Her current adventures with home-schooling are having “varying degrees of success”, but her daughter has learned to card wool, which is as good a skill to have as any, she says.

Using your hands to make something gives you a boost, she adds.

The red wool Berglund used for her sculpture of Covid-19 was bought from a Japanese woman who lives in Co Carlow. Berglund is a Swedish woman so the piece ties up a lot of global loose ends, she says.

Berglund, who did an art degree in NCAD in 2010, is currently making cloth face masks for her elderly neighbours. She thinks that we could be on the verge of a renaissance of craft skills, noting “craft is often seen as a poor relation of fine art”.