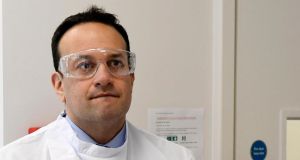 Taoiseach Leo Varadkar: Ireland will have to “figure it out as we go along using the best advice and watching what’s happening in other countries”. Photograph: Aidan Crawley

Government officials are examining plans for a “phased” exit from travel and social restrictions as the Minister for Health warned that Ireland will have to move on to “a different terrain” in the coming months.

Assistant secretary general at the Department of Taoiseach Liz Canavan said that work was under way to determine what any lifting of restrictions would look like.

“I suppose at the beginning, we might have all thought that would happen in one go but we’re more clear now it’s going to happen in a much more phased way. So there’s ongoing work, and there are a number of subgroups looking at a range of issues,” she said.

She said that a senior officials group and Cabinet committee was mapping a way through the coming weeks and this was “constantly being reviewed in relation to where we are now”.

Speaking on Thursday, Minister for Health Simon Harris said Ireland would have to move on to a “different terrain” after any changes to restrictions.

“In relation to the roadmap, there is going to be a point in this country where we will have to live alongside the virus, for want of a better phrase, where sadly people will still get sick and sadly some people will still die, but [the virus] is at a rate that is sustainable for our doctors to manage.”

Fianna Fáil leader Micheál Martin said there was an expectation that restrictions would be renewed following a meeting of the National Public Health Emergency Team on Friday.

“It is fair to say that was made clear at the weekend that the restrictions would not end at the meeting.” He was speaking after a briefing for party leaders on Covid-19.

Taoiseach Leo Varadkar said earlier this week that while there was no “roadmap” or “handbook”, Ireland would have to “figure it out as we go along using the best advice and watching what’s happening in other countries”.

“There is a concern, and we’ve seen elements of this in Asia already, that if you release the restrictions then the virus might spread again. If you have restrictions in one part of the country and not the other, say for example we opened the restaurants in one county but not the other one, would people not flock to that county?” Mr Varadkar said.

Friday’s announcement comes amid warnings that the weekend could be “Ireland’s Cheltenham” in terms of Covid-19 contagion.

Infectious disease expert Dr Paddy Mallon said the Government acted at the right time, unlike in the United Kingdom where an event such as Cheltenham was allowed proceed. Consequently, there are now “tens of thousands” of cases.

It was “one of the seminal” events that led to wider spread of the virus in the UK, Dr Mallon told Newstalk Breakfast.

As concern continues over the Border as a possible weak point in the State’s coronavirus defences, the North’s Public Health Agency announced on Thursday the number of people who had died from coronavirus in Northern Ireland had risen by four to 82.

The agency also reported there were 138 new confirmed cases of Covid-19, bringing the total number in the North to 1,477. A total of 10,203 people have been tested for the virus.

Coronavirus: Further six deaths reported along with 39 new cases 18:51
Taoiseach has confirmed schools will reopen at the end of August 18:38
Private hospitals ‘takeover’ by State will not be extended past June 18:32
Elderly woman living in squalor has capacity to make unwise decisions – court 18:26
‘The pint man is back’: Belfast pub resumes delivery service after legal challenge 17:52