We have a vaccine for the coronavirus: being rich

World View: Threat posed by Covid-19 a function of social class, profession and wealth of nations 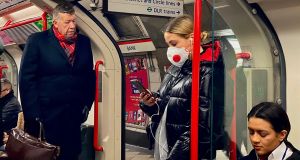 Many in the middle classes can work from home, take sick leave, use separate bathrooms and minimise contact with potential carriers. Photograph: Daniel Leal-Olivas/AFP

With somewhere between 50 and 100 million deaths attributed to it, the Spanish flu that ravaged the world in 1918 was, it was long assumed, an indiscriminate killer. That view took hold in public memory of a trauma that seemed to afflict everyone: young and old, urban and rural, sick and healthy. But in recent decades, studies of mortality rates for that outbreak – one of the most devastating in history – have shown that it did discriminate in a very real way.

One recent study of its impact in Oslo, then known as Kristiania, shows that, after controlling for age, sex and marital status, variables such as apartment size and socio-economic profile had a significant effect on the death rate in the city. In other words, if you lived in a working-class area, you were more likely to die from the illness. The pattern was the same in Chicago, a separate analysis has found, with the illiterate, the unemployed and those with the most cramped living conditions suffering the highest mortality rates.

For all the advances in public health in the intervening century, this basic fact has not changed: there is no such thing as a socially neutral viral outbreak. In the 2009 influenza pandemic, which is thought to have killed between 150,000 and 575,000 people, the mortality rate was 20 times higher in some South American countries and three times higher in the poorer parts of England compared to the richer parts. With the novel coronavirus now sweeping the globe, we know that those most exposed to the worst effects of the disease are older people and those with weak immune systems. But we can add another higher-risk category: those on low incomes.

One of the weak links in the global containment effort will be significant outbreaks in countries with rickety health infrastructure. At the time of writing, only four countries in sub-Saharan Africa have reported a case of Covid-19, but the 2014-2016 Ebola outbreak in West Africa provides a lesson in how community transmission in ill-equipped regions can cause diseases to spread rapidly. Ebola was less contagious than Covid-19 and, unlike Covid-19, was transmitted mainly by bodily fluids, yet Ebola infected more than 28,000 people and caused more than 11,000 deaths. Shortages of staff and supplies and distrust of government made the outbreak worse. With Covid-19, weak public health systems along with underlying malnutrition and other concurrent infections could make the disease far more dangerous to people in the world’s poorest countries.

Even in middle-income regions, there are already signs the quality of health systems could have a significant effect on one’s chances of survival. In China, the death rate has been much higher in Wuhan, the epicentre of the outbreak, at more than 3 per cent, than elsewhere in the country, where about 0.7 per cent of reported cases resulted in death. The Lancet postulated this week that this was likely to be linked to the rapid rise in cases in Wuhan, which stretched healthcare resources and meant there were fewer hospital beds available. In Iran, the fatality rate is 5 per cent, yet in South Korea it is 0.5 per cent. While one possible reason for the country-to-country variation is that there are more undetected cases in some places, it’s also likely that strong, accessible health systems are helping to keep people alive.

In the most developed countries, these inequalities will be every bit as apparent. The ultra-rich can board private planes, easily avoid public transport and access the most luxurious medical care. Many in the well-educated middle classes can work from home, take sick leave, use separate bathrooms to people they live with or minimise contact with potential carriers. Such precautionary steps are linked to occupation and income. Service industry workers such as those in restaurants, retail or the gig economy are far more likely to be in jobs that require face-to-face customer contact – meaning they face higher exposure risk - and far less likely to have paid sick days or the option of working remotely.

Service industry workers such as those in restaurants, retail or the gig economy are far more likely to be in jobs that require face-to-face customer contact

Such disparities are especially glaring in the United States, where more than 27 million people lack any form of health insurance, making them less likely to see a doctor when they become ill or to have health benefits that would help them stave off the disease. Just 29 per cent of American workers can work from home, according to the US labour department, and they’re disproportionately high-earners. Some cities, such as New York and San Francisco, require employers to provide sick leave, but there is no equivalent federal law. And in the US, of course, access to a social safety net is stratified not only by income and education but by race. Nowhere in the developed world are conditions more propitious for an epidemic to take hold.

We have a vaccine for the coronavirus. It’s called being rich.

1 Three relatives dead after apparent murder-suicide in Kanturk, Co Cork
2 Don McLean: ‘My ex-wife is the worst person I ever knew’
3 Gardaí say 52 people who went missing in 2020 not yet found
4 Gardaí not seeking anyone else in relation to Cork shooting deaths
5 Cork suspected murder-suicide may have been over disputed will
Real news has value SUBSCRIBE