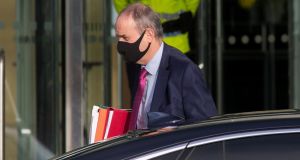 A further 77 deaths of Covid-19 patients were reported by the National Public Health Emergency Team (Nphet) on Saturday evening.

This brings to 2,947 the total number of deaths in the pandemic. Nphet also reported 1,910 further cases of the disease, bringing to 186,184 the total recorded to date.

Chief Medical Officer Dr Tony Holohan said: “Through the solidarity shown by families and communities across the country in recent weeks, we are beginning to flatten the curve of Covid-19 infection.

“Each individual effort to follow the public health advice is making an impact, but we can only continue this positive trend and drive down incidence in the community by continuing to stay at home and avoid meeting or mixing with others in our social circle, including for any close family gatherings, such as birthdays or funerals, as these can be ‘super-spreader’ events.

“We know it is possible to have Covid-19 without displaying symptoms, so we all need to behave as though we are infectious and minimise our close contacts with others. If you suspect that you might be ill, isolate away from others in your household, let your close contacts know and come forward for testing as soon as possible.”

Earlier, Taoiseach Micheál Martin said Ireland faced Covid-19 restrictions for the first six months of the year and noted a problem with the supply of AstraZeneca vaccine would delay the rollout to the over-70s. He also said schools would not be fully open to all students before St Patrick’s day and confirmed the Cabinet would be considering restrictions to foreign travel when it meets next week.

Mr Martin said while he wasn’t necessarily suggesting a six-month lockdown, the Government would be taking a “cautious and conservative approach” with regard to reopening the country, particularly in light of the new variants of the virus.

Nphet has advised that restrictions currently in place should be extended to the end of February, denting hopes of a reopening of the construction sector at the start of next month.

Sources expect that restrictions will be extended until at least the end of February, although Government hopes that some elements of education, especially special education, may reopen next month. There is also hope a partial reopening of construction may be possible later in the month.

But speaking on RTÉ Radio One on Saturday morning, Mr Martin said to relax some restrictions next month, figures for Covid cases must be “well down”. He said he was concerned about the UK variant, as it is currently responsible for 62 per cent of cases.

“It transmits more easily. If we have mass mobilisation, and mass socialisation, it will spread again. I think with the vaccines coming, there’s a need to be cautious and conservative for the first half of this year until we roll out the vaccines,” he said.

“We will be witnessing far more prolonged restrictions than we have to date. I’m the Taoiseach, but I have to consult with my colleagues and Ministers, and we’ll consult with the opposition as well, but that is my sense of it until we get control.”

The news from AstraZeneca, which has advised the EU of a reduction in vaccine supply in Feb and March, is a real setback. The numbers are still tentative and AstraZeneca is due to provide more exact figures at a meeting early next week. Will provide an update as soon as possible.

He added: “I’m not saying there’s a six month lockdown by the way, I’m saying simply we will have a conservative and cautious approach to reopening and we’ll be looking at this every four weeks.”

Mr Martin said that by the summer, there will be a “changed environment” because of the large-scale vaccination that will have been achieved by then.

Social Democrats TD Róisín Shortall was critical of this approach, stating that what the Government has been doing in recent months was “not working”.

“We need to take a new approach. We need stricter lockdowns, hard and all is that is going to be,” she told RTÉ radio one.

“We need to have a longer term plan. We can’t be operating on the basis of a four-week timescale. Rolling lockdowns are not working, we have to face that and we have to take a new approach. I believe very firmly that approach has to be a zero Covid approach.”

On Friday, fresh doubts emerged over the delivery schedule of the “game-changer” AstraZeneca vaccine. The company told the European Commission that there would be delays in the delivery of the vaccine compared with the forecast for the first quarter of the year.

Mr Martin said the Government was waiting on this vaccine and that its delay will “put us in a problem”. He believes the rollout of the vaccine to over-70s will be delayed because of production issues with the AstraZeneca vaccine.

“AstraZeneca was going to be the catalyst to be allowed to move from low level to mass vaccination,” he added.

In a post on Twitter, Minister for Health Stephen Donnelly said the news from AstraZeneca is “a real setback”.

“ The numbers are still tentative and AstraZeneca is due to provide more exact figures at a meeting early next week. Will provide an update as soon as possible,” he said.

Speaking on Saturday with Katie Hannon on RTÉ Radio One, the HSE’s Chief Clinical Officer Dr Colm Henry said this news was “disappointing”.

Dr Henry said this will have an impact on the vaccination programme, but said there have been “many bumps in the road” which “did not turn out to be as bad as predicted”.

However, he acknowledged that the vaccination of new cohorts of healthcare workers would likely be delayed until February.

Following this announcement, Phil Ní Sheaghdha, head of the Irish Nurses and Midwives Organisation, said workers facing into the “eye of the storm” need better protections.

Meanwhile, on the issue of schools, the Taoiseach said it was unlikely there would be a “big bang approach” to reopening.

He said the full one million children won’t be back to full-time in-person education before St Patrick’s Day, but that they can “phase things and do things differently”.

On special schools specifically, Mr Martin said it was a “failure all round”, that the reopening of these facilities has twice been delayed. He said while everyone was acting in “good faith”, there was a “mismatch” between those who wanted to try and reopen and those who had fear and anxiety about public health.

Amid growing fears among EU governments about new variants of the disease, countries across the bloc have moved to tighten travel restrictions and new measures to combat the virus have been reimposed across the world.

The Cabinet’s Covid sub-committee is due to meet on Monday and a range of options on tighter quarantine restrictions, including changes to the visa regime, are due to be discussed.

While there are continuing misgivings at senior level over the effectiveness and enforceability of a blanket mandatory quarantine, arrivals from South Africa and Brazil, as well as other South American countries, may nonetheless face a period of hotel quarantine if a full ban is not pursued. Sources said this approach would allow the State to “test out” how such a system would work.

However, Mr Martin said the “majority” of people coming into the country are Irish people returning from holidays abroad, which he said they “shouldn’t have done”.

Mr Martin made the comments as case numbers of Covid-19 in the Republic continue to be in the thousands and the number of deaths is rising.

An additional 52 coronavirus-related deaths were reported in the State on Friday night, alongside a further 2,371 confirmed cases.

On Saturday there were 1,893 people were being treated in the Republic’s hospitals for Covid-19, with 218 people seriously ill in ICU.

There are growing concerns about capacity in ICU units this weekend. Staff in Cork University Hospital were asked to volunteer for shifts to provide critical care on Friday night as the hospital was hit by staff absences due to Covid-19. The HSE said that patients were being transferred from the west of the country to ICU units in Dublin hospitals, and sources said that there were likely to be more transfers this weekend and into next week.