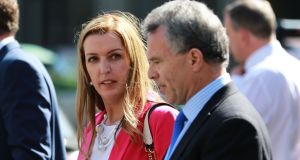 Vicky Phelan arriving at the Dail prior to her appearance before the Public Accounts Committee earlier this week. Photograph: Nick Bradshaw

CervicalCheck was drafting a leaflet as late as March 2018 that it planned to send to women with cervical cancer to see if they wanted the option of receiving details about false negative smear tests.

In a letter released to the Dáil Public Accounts Committee today, the screening programme’s then clinical director Prof Gráinne Flannelly wrote that the leaflet “took a surprising amount of time to sign off” following “multiple iterations of the leaflet.”

The letter shows a leaflet was still being prepared two years after Health Service Executive and Department of Health officials were made aware that CervicalCheck had decided to “pause” letters to the women’s doctors telling them about clinical audits and the false smear tests it uncovered pending legal advice.

Prof Flannelly suggested in her letter to Limerick gynaecologist Dr Kevin Hickey, who treated Vicky Phelan who exposed the controversy, that the best place to post the leaflet was on Cervical Check’s website.

CervicalCheck planned to include a “notification slip” that the affected woman could tear off and send back to the screening programme if they wanted to “opt in” to receiving information about false tests.

“This leaflet is designed to inform women about the cancer review or look back progress and gives them an option to contact CervicalCheck if they would like to be informed about any outcome,” Prof Flannelly wrote.

“It was discussed at the executive management team meeting and, given the infrequency with which cervical cancers [are] present, it was felt that the most accessible place to have this leaflet would be on the CervicalCheck website as a downloadable and printable document.”

Prof Flannelly told Dr Hickey that the woman “would be able to tear off the notification slip and send directly to the CervicalCheck programme to opt in to receiving this information.”

She added: “We hope this will mark a considerable improvement to our process.”

Prof Flannelly’s letters was among a number of records shared by the Limerick hospital group to the Public Accounts Committee.

Another document shows that at least six of 11 women with cervical cancer being treated by the Limerick hospital were not told about the clinical audit until after Ms Phelan’s High Court settlement on April 25th, 2018 that led to the revelation that at least 162 women were not informed about false smear tests.

Two women were informed about the audit on April 30th, 2018 while four were told the following day. A seventh woman was informed in April 2018, according to the document.

The programme’s clinical director wrote to Dr Hickey in response to a letter he wrote to her on March 1st, 2018 setting out the history of his dispute with CervicalCheck over who should tell the affected women.

The Limerick doctor wrote to Prof Flannelly to see that changes the screening programme had agreed to - namely, to “inform cervical cancer patients that an audit of their preceding smear prior to their diagnosis had taken place and that the results would be provided to them by CervicalCheck” - were being implemented.

He was checking on Prof Flannelly to see if she was following through on changes the programme had agreed to after meetings with colposcopists around the country on September 1st and October 26th, 2017, some of whom had raised concerns that the programme felt they were best placed to tell the women if they saw fit.

“Furthermore there was a proposal from CervicalCheck that an information leaflet would be provided to the patients in this regard. I think all of this is the appropriate course of action,” Dr Hickey wrote.

“I would be most grateful if you could provide me with written confirmation that these changes are now being implemented by Cervical Check.”

All three were also copied on Prof Flannelly’s reply to Dr Hickey.