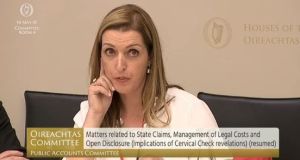 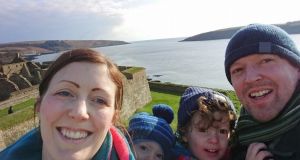 Vicky Phelan, who exposed the cervical screening controversy has said “if I do die, I want it not to be in vain”.

The 43-year-old mother of two with terminal cancer from Annacotty, Co Limerick told the Dáil Public Accounts Committee (PAC) she is “not interested in revenge” but wants accountability from the health service over the CervicalCheck scandal.

Ms Phelan last month settled a €2.5 million action against a US laboratory which provided her with an incorrect smear test result. She took proceedings after it emerged her 2011 smear test, which showed no abnormalities, was found, in a 2014 audit of smear tests on a number of women, to be incorrect.

She appeared before the committee along with Stephen Teap whose wife Irene from Carrigaline, Co Cork, was diagnosed with cancer in 2015 and died last year after two undisclosed false negative smear tests in 2010 and 2013.

It emerged last month that at least 162 women with cervical cancer had not been informed about the CervicalCheck audit results and past false tests. Of 209 women who could have had earlier intervention in light of false tests, 18 have died.

The Public Accounts Committee and the Oireachtas Health Committee have begun investigations into the matter.

“If I do die, I want it not to be in vain. I want protocols to be put in place and sanctions for people who make mistakes and that the HSE is overhauled from the ground up, so that people are held accountable and this will never happen again,” Ms Phelan said.

Ms Phelan told the PAC a smear test in 2011 came back negative. She was later diagnosed with cancer in July 2014 following another smear test. She said she had been suffering mild symptoms including back pain and bleeding. She subsequently underwent a five-week course of radiation and chemotherapy, which ended on her 40th birthday.

Following a check-up in September 2017, she found out the cancer was back and had spread upwards, affecting vital organs and it was terminal. She was told of her incorrect smear test in September 2017 and began legal proceedings last January.

“The misdiagnosis in my case has cost me my life. I’ve got terminal cancer,” she said.

“I don’t believe I’m going to die but I have to fight for my life every day.”

Ms Phelan said three issues needed to be looked at; open disclosure, patient safety and senior HSE management who approved the communication strategy regarding the audit results and whether patients were to be told about them.

“At least I’m still here to tell the tale and that’s why I’m fighting with everything in my being,” she added.

Ms Phelan concluded her remarks to the PAC stating she was there to see change. “I swear to God over my dead body, I’m going to keep at this. Simple as that,” she said.

Ms Phelan and Mr Teap said the 35 HSE officials who knew about the 2016 briefing memos from the CervicalCheck programme - which revealed internal knowledge about false smear test results found in a lookback - should be “stood down in the same way as Tony O’Brien”.

“Clearly the HSE needs to be reformed, particularly at senior level,” he said.

Mr Teap said he couldn’t understand how people in senior HSE positions who knew about the memos remain in these positions today.

“We have dead women, terminal diagnoses, death sentences,” he said.

Mr Teap said patient care needs to be put at the backbone of the HSE “right up to senior management”. He said mandatory open disclosure is “worthless” unless sanctions are also introduced against individuals who don’t comply with it.

Mr Teap said his wife’s goal was to see their eldest son start school in September 2017 but she died on July 26th, aged 35.

Ms Phelan’s solicitor Cian O’Carroll said documentation showed “there was a coordinated, premeditated plan to deny patients the information”. “Not in total,” he said. “The documentation suggests that it was envisaged that some patients would be told of the audit, albeit quite late in the day.”

Ms Phelan and Mr Teap were both applauded by members of the PAC, some of whom became upset during the session.

Fianna Fail TD Sean Fleming, chairman of the PAC thanked them both for their “harrowing” accounts and said it was “a deeply humbling experience”.

“We’ve listened to failures of the State and State institutions and everything will be in vain if there’s no fundamental changes in the future,” he said.

The Public Accounts Committee is due to resume its hearings into the scandal at 9am on Thursday.

Meanwhile the HSE Serious Incident Management Team said on Wednesday evening contact has been made with 205 of the 209 women t or their families affected.

A helpline set up in the wake of the controversy answered 771 calls on Wednesday, taking the total number of calls answered to date to 18,623.