Mass vaccination centres, hospitals, GPs and pharmacies will all have a role to play 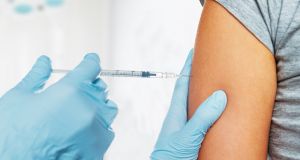 Under the plan the State will roll out 14 million doses of at least five different vaccines. File photograph: Getty Images

Cabinet will today sign off on a plan to deliver more than €100 million worth of vaccines across the country – including at mass vaccination centres – as the State moves to implement the most important inoculation programme since its foundation.

Under the plan the State will roll out 14 million doses of at least five different vaccines.

There will be five types of locations where the doses will be administered across the country, including mass vaccination centres potentially at Citywest in west Dublin and the National Show Centre in Cloghran, near Dublin Airport.

The details are contained in a new report prepared by a high-level taskforce chaired by Prof Brian MacCraith, which details the types of locations which will be used at different stages of the planned roll-out.

The first locations will be hospitals, followed by long-term residential care facilities, which will be served by mobile distribution teams from a nearby hospital.

There will then be centralised mass vaccination centres, and once broader sections of society are vaccinated GPs and pharmacies will play a bigger role.

The programme will draw on the existing pool of vaccinators working within the health system, and sources said there were a number of options being progressed to scale up the workforce for the roll-out.

The HSE is also working on a new IT system which will cover registrations, bookings, second bookings and monitoring.

Sources said a “ready-made software solution” was being sourced, and it is hoped it will be ready by the end of the year.

Ireland is currently signed up to at least five advanced purchase agreements for different vaccines, and if these are all approved by the European Medicines Agency at least 14 million vaccine doses will be available.

Sources have said the cost of the drugs will be about €112 million.

However, even as the Government prepares to launch its plan, Taoiseach Micheál Martin said the “optimal period” for vaccine roll-out would not be until the spring.

He also said that there could be further restrictions in January.

Minister for Health Stephen Donnelly will bring the plan to Cabinet at today’s meeting, where Ministers will also consider the complex storage and distribution requirements for the different Covid-19 vaccines.

Key to the Government plan will be a communications strategy designed to build trust in the inoculation programme and to reassure society about safety and efficacy. It is expected that “trusted experts” will be asked to “debunk misinformation” and provide facts on the vaccines.

On Monday Ireland’s drug regulator said there would be no “lowering of the bar” in the approvals process.

No regulatory body, here or abroad, would make any new vaccines available “without having full confidence that they are safe and that they work”, said Dr Lorraine Nolan, chief executive of the Health Products Regulatory Authority.

“All vaccine applications will be reviewed just as carefully and as rigorously as any other medicine. We will be led by the evidence and by the science,” she told a National Public Health Emergency Team (Nphet) briefing on Monday.

Asked about a new variant of the virus identified in the UK, assistant chief medical officer Dr Ronan Glynn said very little information was available, and it was too early to say if this variant had any effect on the immune response.

The deaths of a further two patients with Covid-19 were reported by Nphet on Monday. This brings to 2,126 the total number of deaths in the pandemic.

Another 264 confirmed cases of the disease was also reported, bringing the total number of cases to 76,449 in the Republic.