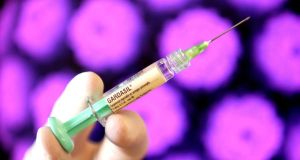 Gardasil: the human papilloma virus vaccine protects against cervical and other forms of cancer. Photograph: Voisin/Phanie/Rex/Shutterstock

Almost 650 girls in Ireland reported requiring medical intervention or treatment after receiving the HPV vaccine, according to data collected by the State’s medicines watchdog.

The Health Products Regulatory Authority has received 1,099 reports of adverse reactions and events associated with the use of the vaccine, but it said that this should not be taken as evidence of a causal link and that the benefits continue to outweigh the potential risks.

It said 59 per cent of the reports – or 648 cases – were considered serious, meaning they included circumstances where patients required intervention, such as a review by their GP, treatment for their symptoms, or both.

“The majority of reports we have received have been consistent with the expected pattern of adverse effects for the vaccine, as described in the currently approved product information,” a spokeswoman said.

The authority’s view, based on reviews by the European Medicines Agency, was that the benefits of HPV vaccines continue to outweigh their risks, she said.

The HPV – or human papilloma virus – vaccine, marketed as Gardasil, protects against cervical and other forms of cancer.

Ireland has one of the highest cervical-cancer rates in western Europe, with 90 deaths a year, but uptake of the vaccine has plummeted following opposition from a number of groups.

Among the most commonly reported effects to the authority are short-term “vaccination-related events”, occurring at the time of vaccination, such as syncope, or fainting.

The HSE, which noted that syncope can occur after any vaccination, especially in adolescence, advises girls to prevent it by sitting down for 15 minutes after vaccinations.

One in five European reports

Ireland accounts for one in five of all reports of suspected adverse reactions against Gardasil in Europe. The European Medicines Agency’s database lists 12,321 reports in relation to the vaccine, of which 5,396 related to the European Economic Area.

Asked what action the authority takes in response to adverse-reaction reports, the spokeswoman said it reviews and sends them to the agency, which maintains a database of reactions reported by other countries worldwide.

“The presence of a safety signal” – information about a new or known adverse reaction that requires investigation – “does not directly mean that a medicinal product or vaccine has caused the reported adverse reaction or event.”

Published studies are also reviewed, as relevant evidence is assessed in order to establish where a causal relationship exists between the vaccine and the reported event, she said. “Depending on the scientific findings of the evaluation, there may be a recommendation for further action, such as an update to the product information.”

The authority also follows up with the healthcare professionals involved in the care of patients where suspected adverse reactions occur, according to the spokeswoman.

Monitoring of side effects

In 2015 the European Medicines Agency published a review of data about women with two conditions, complex regional pain syndrome and postural orthostatic tachycardia syndrome, who had received HPV vaccines. It concluded that the evidence did not support a causal link between the vaccines and the development of either condition. The European Commission then decided that the vaccines could continue to be marketed.

“The decision confirms, as indicated in the related EMA statement, that the benefits of HPV vaccines continue to outweigh their risks,” the authority’s spokeswoman said. “The safety of these vaccines, as with all medicines, continues to be carefully monitored, and [the monitoring] will take into account any future new evidence of side effects that becomes available.”