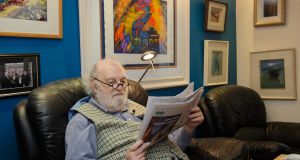 A device which provides heart-failure patients with an early-warning system and enables them to be monitored remotely on a daily basis from their homes has been implanted in five Irish patients for the first time.

The tiny device – the size of a paper clip – is implanted in the pulmonary artery attached to the heart. By measuring pulmonary artery pressure doctors can tell if the heart is working efficiently or if there is early evidence of worsening heart failure.

According to the Health Service Executive’s National Heart Failure Programme, more than 90,000 Irish patients suffer from heart failure every year with about 7,000 requiring hospitalisation.

The five patients using the device have been selected to take part in a clinical trial being overseen by Prof Niall Mahon at the Mater Private Hospital, Dublin. The “CardioMEMS” picks up changes in the patients’ pulmonary artery pressure before these changes manifest in symptoms such as breathlessness, fluid retention and weight gain, conditions which often lead to the patient being hospitalised.

It “enables us to intervene at an early stage and change the patient’s medication. It’s a proactive system rather than a reactive one. As a result hospitalisations are greatly reduced with patients and indeed their families enjoying an enhanced quality of life in the comfort of their own homes”, Prof Mahon said.

CardioMEMS has been approved in the US by the Food and Drug Administration. “Once approved on this side of the Atlantic we would hope to see many more Irish patients benefitting from this technology,” he said.

The first patient to have the device implanted, Tony Hennessy from Brandrum, Monaghan, said he was impressed. “CardioMEMS enables my doctors to intervene at an early stage and change my medication before I start to exhibit symptoms and feel unwell. That is the key issue for me.”

By detecting changes earlier, doctors can intervene and prescribe the appropriate medication

He had been diagnosed with a heart condition and had heard about the device being used in the US and volunteered for the trial. Previously when his pulmonary artery pressure changed he would invariably end up in hospital requiring a catheter and all the hassle which that involved including trips and overnight stays in Dublin. “Of course, being able to stay at home is another big plus, not just for me but for all my family,” he added.

The CardioMEMS has no battery or moving parts and is installed in a one-off 30-minute procedure. The device, manufactured by Abbott, is paired with a transmitter in the patient’s home. Every day, at an agreed time, the patient records their pulmonary pressure. It is then transmitted remotely to the Mater’s cardiology unit where it is monitored. By detecting changes earlier, doctors can intervene and prescribe the appropriate medication.

When he feels unwell, Mr Hennessy said the Mater invariably contacts him to say his heart pressure is up. They contact his pharmacist directly. Within hours of taking changed medication, he feels well.

The average length of stay in hospital for heart-failure patients in Ireland is up to 11 days so the potential of this new technology is clear, Prof Mahon said.“Over 4,000 of these devices have been fitted to patients, mainly in the US, and hospitalisations for this group have been reduced by up to 50 per cent. Given the ongoing bed shortages, the benefits for hospitals and the wider health system are also clear.”

Telemedicine, he said, was going to dominate in the future in areas such as cardiac care, which would in effect move hospital clinics “to the comfort of the home”.

Coombe should not have given Covid vaccines to family of staff, Donohoe says 11:54
Vaccine should not be given to people close to death, says HSE 11:27
Brexit: Currys/PC World Irish customers asked to pay import taxes in error 10:29
Defence forces deployed to three nursing homes to ease staff pressure 10:08
Number of Covid-19 patients in hospitals exceeds 2,000 09:50