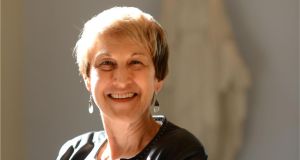 Alexander Technique teachers from Australia, North and South America and Europe gathered in Dublin last week to share their knowledge and experience of this postural education first developed by Australian actor, Frederick Matthias Alexander in the nineteenth century.

What's interesting about Batson is her interdisciplinary knowledge and also more recently, her passion for research into how dance or the Alexander Technique to help older people maintain their balance.

"I trained as a dancer and then I had an Alexander Technique lesson in 1981 and decided to train as an Alexander Technique teacher. Later, I became very interested in somatics (retraining the body's alignment through mental imagery) and then went on to study physiotherapy and much later I did a doctorate in neuroscience," she explains.

She says that the Alexander Technique doesn't teach people anything strange or unusual - instead, it teaches people how to be free in themselves and be more comfortable in their bodies. "The Alexander Technique teaches self-regulation which is really the art and science of self development and self care. It's about coming into a relationship with material objects as simple as a cup of tea or into complex relationships with significant people in your lives that tend to trigger stressful reactions."

"Imagine how your home is safe, accessible, beautiful, practical, functional, easy and comfortable - well that's how we should be in our bodies too," she adds. "The Alexander Technique is a conscious body-mind discipline. We don't have exercises to do but [THE AIM]is to live consciously with awareness in our bodies as we function in the world -whether it's skilled or pedestrian movement."

The Alexander Technique is not a therapy as such which is why those trained in the technique are called teachers and the sessions they give are usually called lessons.

Batson says what interests her most nowadays is how brain scans can now identify new increased brain activity following a series of workshops in either dance or the Alexander Technique.

"There is an understanding now that the brain is not an isolated thing in your head but that it changes through learning and the information it receives from the body," she says.

In one pilot study, a patient with Parkinson's disease showed new links between the planning and motor centres of the brain after five days of intensive workshops.

Batson is very keen to carry out research with older people on how individual and group lessons in the Alexander Technique might improve their physical balance and psychological wellbeing as they age. "We make assumptions about older people that they can't improve or learn to overcome disabilities but we have seen older people change from being uncoordinated to being poised. After ten days of workshops in the Alexander Technique, they moved faster without hesitation or stumbling."

First developed by Frederick Matthias Alexander, an Australian actor who began to lose his voice during performances. When observing himself in mirrors, Alexander realised he was pulling his head backwards and downwards before delivering his lines which compressed his spine, chest and ribs. By focussing on lengthening his neck muscles, he regained his voice control. Alexander explored how rethinking and re-learning movements could help other postural problems. The Alexander Technique gradually became established across the world - especially as a tool for musicians and actors who suffered pain when performing. It has also been used to treat back pain, neck pain, arthritis and insomnia. Alexander Technique teacher, Richard Brennan runs a training centre for Alexander Technique teachers in Galway. He will lead a residential training programme in the Alexander Technique from April 15-19 in the Emmaus Retreat Centre, Lissenhall, Swords, Co. Dublin. Cost €495 including all meals, tuition and accommodation. Booking on Tel:01 8700050