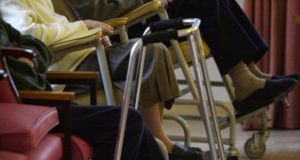 Hiqa revoked the licence of The Cheshire Foundation in Ireland to operate St Laurence Cheshire Centre in Glanmire. Photograph: The Irish Times/Files

A residential centre operator has had its registration to run a centre in Cork cancelled after the Health Information and Quality Authority (Hiqa) found “potentially catastrophic” medications errors and problems with cleanliness, governance, staffing and health and safety.

Hiqa revoked the licence of The Cheshire Foundation in Ireland to operate St Laurence Cheshire Centre in Glanmire, which looks after people with disabilities. The foundation operates 20 other centres across the country.

The Hiqa report, published on Wednesday, found between April 1st and July 12th 2016, there were 43 medication-related incidents reported at St Laurence’s.

Inspectors visiting the 22-bed home in July last year found some of the medication errors were “potentially serious and some were recurrent”.

In one case a resident did not receive two doses of antibiotics, resulting in no antibiotic cover for 24 hours. On another occasion, a pain patch was not applied for a resident for two days. Other patients had night medication administered in the morning.

“The impact of such medication-related errors could potentially be catastrophic and therefore, a judgment of major non-compliance was made,” the Hiqa report said.

Inspectors found the quality of care of the residents, particularly residents with significant medical, nursing and clinical needs, “was not adequately monitored on an ongoing basis”.

During the July inspection, inspectors found a resident who had complex needs and who had a surgical wound that was not cared for properly; the wound deteriorated and the resident had to be admitted to an acute hospital.

Monitoring of residents’ fluids, when required, was not adhered to and in one case, records showed a maximum-dependency resident had not received fluids for 10 hours.

The centre, which has since changed management with the help of the Health Service Executive (HSE), was found to be non-compliant in terms of cleanliness. Inspectors found shower trolleys that were visibly dirty and shower chairs with urine and faecal staining, and the flooring and wall tiles in bathrooms were scuffed and in a state of disrepair.

Inspectors also found residents’ complex medical, nursing and clinical needs could not be met because “staff lacked the required skills to support and care for residents”.

“It was evident that staff were not facilitated to attend training to promote and ensure the safe care of the residents accommodated in the centre,” inspectors said.

They found the centre did not have adequate staff at night. There were three care staff on duty, but some residents had significant needs and needed assistance from two or three staff at a time, while some were “not physically able to use a call button”.

Personal plans for residents were also found to be “conflicting and disjointed”.

In a statement, Hiqa said it had cancelled the registration of the foundation for St Laurence’s last month. The provider had appealed the decision to the District Court, but subsequently withdrew the appeal.

The HSE, with the assistance of another provider and with the consent of the foundation, had put measures in place to address the immediate risks to residents and on July 28th, another organisation was granted registration of the centre.

The Cheshire Foundation of Ireland runs 20 other homes in Ireland. Last month, inspection reports were published for three of the homes.

One centre, Kerry Cheshire Home in Killarney, was generally in compliance with the regulations and standards. However, significant non-compliance was found in two centres; the Donegal Cheshire Apartments in Letterkenny and the Cara Cheshire Home, in Chapelizod, Dublin.

Hiqa had previously issued notices warning of a proposal to cancel the registration of both centres. A second inspection in Donegal found improvements were made subsequently, which had a positive effect on residents’ experiences. But in March this year, an inspection of the Cara home found it remained in substantive non-compliance.

A plan has been put in place outlining improvements required at the centre.

In a statement, Cheshire Ireland confirmed Enable Ireland took over last July as the service provider for the St Laurence facility in Cork.

“Cheshire Ireland was unable to meet the increasingly complex medical needs of the service users at the facility and so it worked closely with the HSE and Hiqa to ensure a smooth handover of services to Enable Ireland. Cheshire Ireland is committed to ensuring that the highest levels of safety and welfare standards are adhered to in all of its facilities nationwide,” it added.