Water, water everywhere but why did we build on flood plains?

Conor Pope visits the Strand area beside the river Shannon in Athlone where local residents are just about keeping flood waters at bay using pumps and sandbags. Video: Bryan O'Brien 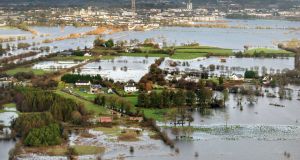 Flooding along the banks of the Shannon near Athlone. Photograph: Brenda Fitzsimons

The Cabinet has agreed a number of measures expected to help control flooding along the Shannon and elsewhere, but will this latest investment have any lasting impact?

About 300 areas have been identified as warranting flood-mitigation measures. The response includes a mixture of heavy engineering and dredging, additional pumps and more walls.

Yet once again the response has more to do with reacting than with planning.

Large-scale dredging to deepen river channels might improve things for a while but it is no longer considered a sustainable response by engineers.

There are also EU directives against destroying habitats and ecosystems, reasons why dredging is falling out of favour in other countries.

Even without the environmental aspects, dredging is not a sustainable approach, said Dr John Sullivan of the department of civil engineering at University College Dublin.

Initial benefits are lost if there is no repeat dredging so costs escalate.

The Shannon itself will also thwart large-scale dredging efforts. The Shannon is very flat and flows slowly except during flooding. If you deepen the channel you slow the river down, allowing it to deposit more sediment on the river bed which requires more dredging to clear it out.

And once again a major cause of flooding is being ignored. The problem is not always just the water.

Much of the flooding is ultimately caused by bad planning, allowing housing, roads and services to be built on river flood plains.

In some cases these houses can never be adequately protected from floods, and will always remain at risk given their location on a flood plain.

The only alternative for some may be moving away to higher ground, something that carries a high emotional and financial cost. And that risk is much more imminent given the severe weather brought by climate change.

“Continuing intensification of heavy rainfall events is one of the most certain consequences of climate change during this century,” Prof Richard Allan, professor of climate science at the University of Reading, said on Tuesday when commenting on flooding in the UK.

This does not mean we have no possible response to the great personal and financial losses being caused by the latest round of flooding.

A small amount of planning and a relatively minor investment could have given those living along the Shannon a good 10 days’ warning that flooding was on the way, according to UCD civil engineer and hydrologist Prof Michael Bruen.

It then took another four or five days before rivers reached crisis levels and heavy flooding hit.

Those living in known at-risk areas should have had eight to 10 days to prepare.

A comprehensive hydrometric system is already in place that gives river-level updates on a 15-minute basis so it is already possible to anticipate flooding.

Engineers have also warned that flood mitigation carried out at one point on a river catchment may simply move the problem downstream or upstream to cause flooding in another community.

Heavy engineering, including walls and embankments, may control urban flooding but water flow upstream may be slowed, causing river levels to rise.

Equally, the contained water may increase water flows arriving in downstream towns and villages. Engineering decisions must, therefore, be taken with care.

This is particularly true if attempts are made to flood bogs and use them as reservoirs to lower river levels. This is a perfectly viable flood-mitigation measure but would require in-depth studies to assess benefits versus costs.

A bog would fill very rapidly if a river was in full flood, and once it reached its capacity it could hold no more, Dr O’Sullivan said.

And the bog would have to hold on to the water for long periods before it could drain away, particularly if it drained back into the slow-moving Shannon.

This latest round of flooding has shown us once again that holding back the flood is a battle and one that, in light of climate change, we are unlikely to win. While engineers can provide a fix, better foresight and good planning may accomplish more.