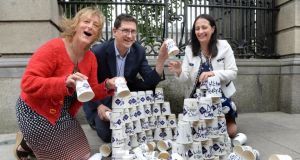 A Bill to introduce a recycling deposit scheme for bottles and cans, and to eventually ban single-use, non-recyclable plastics in food and drink outlets has been published by the Green Party.

The deposit scheme would incur a very small cost for manufacturers, which would be refunded to consumers who returned glass or plastic bottles and cans for recycling – eg at 10 cents per item.

Such schemes are operating successfully in other countries and have led to a reduction in plastic pollution and littering.

The Waste Reduction Bill 2017 also proposes that a ban on plastic coffee cups and cutlery would be phased in, and require their replacement by recyclable or compostable products.

“It is now predicted that by 2050, there will be more plastic in the oceans than fish and that 99 per cent of seabirds will have ingested plastic, ” he said.

Mr Ryan said he was confident of getting cross-party support for the Bill. He had no doubt Irish people would respond well to its requirements. A successful glass bottle deposit scheme had operated in the ’60s and ’70s, he recalled.

Ireland was producing in the region of 210,000 tonnes of plastic per year, Mr Ryan noted.

In a recent clean-up of the Dodder river in Dublin, bottles and cans were the single biggest litter item - material that could contaminate the waterway for between 200 and 300 years, Mr Ryan said.

Repak, the company licensed by the State to operate a statutory recycling scheme for industry, has advised against such a deposit scheme in the past.

However, Mr Ryan said such a move was now timely, given the huge increase in non-recyclable packaging and plastic. In addition, with the arrival of mass incineration to the Irish waste sector, he believed the Repak approach was not the best model.

Party deputy leader Catherine Martin said surveys showed that 89 per cent of Irish people would support a deposit refund scheme, and Minister for Environment Denis Naughten had previously voiced his enthusiasm for such a move. “We’re confident all parties in the Dáil will support such a common-sense proposal,” she said.

Green Senator Grace O’Sullivan said fears about the level of plastic pollution in our environment were well-founded. “We can see the massive damage we are doing to crucial habitats.

“The Government must take strong action to tackle plastic waste, and to support a truly ‘circular economy’ at the European and global level. We need to protect human health, as well as the health of our seas and oceans, which Ireland in particular relies on for so much,” she said.