Traffic plan for Dublin may not see light of day, says council 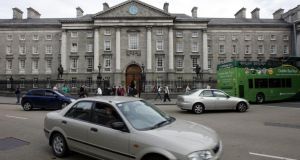 Under the plans, half of College Green would be turned into a pedestrian plaza. Photograph: Eric Luke/The Irish Times

The National Transport Authority’s plans to eliminate traffic from large parts of Dublin city centre “may never see the light of day” according to the city council’s senior traffic engineers.

While the study is dated June 2013, the council’s roads and traffic department received it just two weeks ago, said Brendan O’Brien, the department’s head of technical services. “It wasn’t a joint plan and there’s a lot in that study which may never see the light of day,” he told city councillors.

It was “never intended to be anything other than a discussion document”, he said.

Michael Phillips, director of traffic and city engineer, said public expectation had been raised that certain changes would be made, but this may have no basis in reality.

“We were very disappointed in this leaked document,” he said. “There are a number of serious issues with it and our worries are that there has been an expectation created out there that we will not be able to deliver.”

Mr Phillips apologised to city councillors who, as members of the traffic committee, should have been the first to be made aware of the proposals.

“We would only bring a document to you that we know was workable that we would see as working on the ground,” he said. “You may agree or disagree with a plan, in which case we would go back and make modifications.”

Putting proposals in the public arena which the council may not be able to deliver created a “backlash and a credibility issue” from which it could take “an awful long time to recover”, Mr Phillips said.