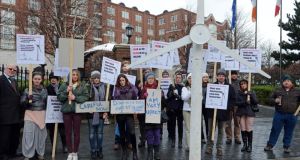 Ireland will incur hundreds of millions of euro in penalties if it fails to meet renewable energy targets by 2020, prompting a major focus on developing wind energy, a conference in Dublin has been told.

The Minister for Communications, Energy and Natural Resources Pat Rabbitte said a key component of the strategy will be the development of an intergovernmental agreement for the export of electricity generation to the UK.

By 2020 Ireland must generate 40 per cent of its electricity from renewable sources.

“The target will not be achieved without an increased in wind energy build,” said Mr Rabbitte.

“Non-achievement will result in compliance costs . . . these could amount to around €100 million to €150 million per annum for each percentage point shortfall in renewable energy, and a further €250 million in emissions permit purchases.”

In the last 10 years some 1,250 turbines in 150 wind farms across 22 counties have been commissioned, with a total capacity of 1,738 megawatts of electricity. However, we are 630 megawatts behind where we should now be.

“Ireland has an excellent largely untapped wind resource which could be developed for export,” said Mr Rabbitte.

There is a capability to achieve international targets with capacity to spare. “This means that there is a potential for projects of scale onshore that are aimed at export markets,” he said.

Ireland and the UK have signed a memorandum of understanding with regard to exporting electricity and it is hoped an “intergovernmental agreement” will be settled by the end of the year.

However, a campaign group from Co Laois – one of the counties targeted for onshore development – protested outside the conference yesterday.

Spokesman Ray Conroy said there was concern that farmers were signing contracts for the erection of turbines with implicit environmental and health effects.

“A lot of people are not aware of the size of these things,” he said.

“They have not been given the argument of the health issues [regarding concerns over noise and vibration output] or the effects on property prices in the area.”