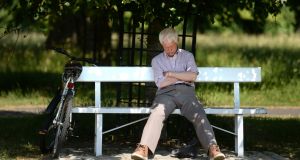 A man sleeps in the shade in the Phoenix Park in Dublin. Photograph: Dara Mac Dónaill/The Irish Times.

Ireland’s heatwave appears to have passed its peak but temperatures were still expected to rise to between 25 and 28 degrees in most places on Saturday.

Having seen the mercury tip 32 degrees on the west coast on Thursday and 31 degrees on Friday, Met Éireann has forecast a slight cooling off, but believes more hot weather is on the way in a summer now being widely compared to the searing heat of 1976.

There is a chance of showers in the west and northwest later on Saturday and isolated showers on Sunday, but the forecaster said “otherwise there’ll be no break in the drought conditions” as the State’s heatwave continues.

The forecaster has issued a status yellow drought warning which is valid until Friday, July 6th, as well as a status yellow warning for high temperatures which was due to expire at 10pm on Saturday.

Met Éireann’s definition of a heatwave is five consecutive days of maximum temperatures of 25 degrees and over for a given location.

Temperatures in Leinster and Munster are expected to hit highs of 25 to 28 degrees on Sunday, but cloud will increase through Ulster and Connacht where values are seen rising to between 18 to 24 degrees.

The highest temperature on Friday, 31.1 degrees, was recorded at Shannon at 4pm, about a degree below where thermometers there peaked on Thursday.

Met Éireann’s John Eagleton said the recent weather was similar to a period in 1976 when a streak of warm and sunny weather continued from Easter until the end of August, with temperatures peaking at the end of June.

Asked if a repeat of that lengthy summer was on the cards, Mr Eagleton said: “Nobody knows” but that Friday was “the last day of the really mad temperatures” for now.

One small corner of Ireland, however, managed to find a cloud on Saturday. Malin Head in Co Donegal found itself under sea fog and temperatures had not risen above 12 degrees by mid-afternoon.

For the rest of the country, a slight dip from the heat of recent days could be welcome.

“It’s been an exceptional heatwave that comes to Ireland once in a blue moon, a generational heat wave,” said Mr Eagleton. “Let’s hope it is.”

Despite the weather and the public’s enjoyment of it, emergency services have not reported any serious recent incidents.

The Coast Guard said it had only had to deal with routine incidents on Friday, including offshore pollution reports and coming to the aid of broken down pleasure boats and jet-skis.

On Saturday, Dublin Fire Brigade reported that it had responded to grass or gorse fires in Deerpark in Howth, in Tolka Valley in Finglas, and in Griffeen park in Lucan.

Next week, Met Éireann said it would remain warm or very warm, but with a greater risk of scattered or isolated showers and some cloudier periods. Top temperatures on Monday are expected to reach 24 to 27 degrees.