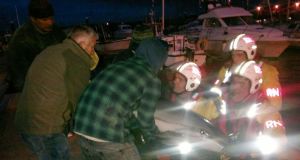 Fenit RNLI crewmembers working with locals to help save a stranded baby dolphin in the Kerry town after it was washed up on a remote beach. Photograph: Michael Tobin/RNLI/PA Wire

A lifeboat crew in Co Kerry has helped save the life of a baby dolphin.

Fenit RNLI and three local families worked together to save the life of the baby bottlenose dolphin who became stranded on a remote beach - just metres from the sea - on Fenit Island on Tuesday night.

In a rescue operation that involved members of the Egan, Tobin and McCarthy families, three RNLI volunteer lifeboat crew, an inshore lifeboat and a 4x4, the dolphin was safely deposited in deep water by the lifeboat crew.

Local woman Breda McCarthy was out walking her dog on Fenit Island when she came upon the stranded dolphin. It was lying in a small channel quite a few metres from the sea.

It apparently swam in at high tide a few hours earlier but got cut off when the tide retreated, and was clearly in distress.

"After discussing the situation with the expert it was decided that the best course of action for providing a safe outcome would be to transport the dolphin down to the harbour and then transport it by RNLI lifeboat out to sea to be released," a spoksewoman for Fenit lifeboat said.

The dolphin was carefully wrapped up and transported in the 4x4 to the harbour, where an RNLI lifeboat crew were already waiting in the inshore lifeboat to launch. They took the dolphin onboard and proceeded immediately out to sea.

On releasing the mammal into the water the lifeboat crew watched as it slowly started to swim around the vessel in ever increasing circles, gaining confidence as it went. Once they were satisfied it could safely swim away, the crew returned to shore.