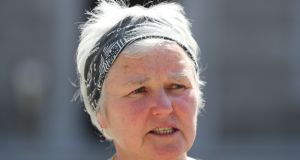 People Before Profit TD Bríd Smith has defended her online comments about a High Court judge following his ruling on minimum pay and entitlements for electricians.

On Tuesday, Mr Justice Garrett Simons found a sectoral employment order made by Minister for Business Heather Humphreys had been made outside her powers and was unconstitutional, thereby striking down a law guaranteeing minimum pay in the sector.

It followed a challenge taken by contractors against the order which set out pay rates, pension and sick pay entitlements in the electrical industry.

Ms Smith criticised the judgment, dismissing it in a statement as a “declaration of war” on any protections for workers.

“That is scandalous and tells us a great deal about the judicial system in this country. The irony that a judge earning over €210,000 a year can be worried that an electrician on €45,000 may be overpaid will not be lost on the workers affected.”

However, a post on Ms Smith’s Facebook page has drawn particular criticism. In it, Mr Justice Simons is photographed in a meme with the wording “This is Garrett Simons. He’s a high court judge. He earns over €200,000 a year. And he’s just put the boot into workers.”

This is absolutely scandalous by Bríd Smith. Lots of judgements I don't agree with (and most politicians wouldn't agree with this one) but politicising the judiciary in this way is a dangerous new gambit by the Irish far left and shouldn't be entertained with any seriousness https://t.co/wFAdEnykR6

He said: “[There are] lots of judgements I don’t agree with (and most politicians wouldn’t agree with this one) but politicising the judiciary in this way is a dangerous new gambit by the Irish far left.”

Other Twitter users compared Ms Smith’ comments to the behaviour of US president Donald Trump and Hungary’s Viktor Orbán.

Another accused the TD of “overstepping separations of power between the executive, legislative and judicial branches of gov(ernment).”

However, speaking to The Irish Times, Ms Smith said she did not believe it was an overstep and did not regret it.

She said it was an attempt to “put a human face on who is making the decisions on your life”.

Many people, she said, see the judiciary as being “out in the ether”.

Asked why she did not simply focus on the court’s ruling as opposed to the judge himself, she said: “Because he made the ruling.”

She also defended her highlighting the judge’s salary saying many people would be “shocked” by it.

Ms Smith claimed judges are political appointees and are not accountable. She said the ruling had the potential to spread into other sectors and was hugely problematic in terms of workers’ rights.

The High Court action was taken by members of the National Electrical Contractors of Ireland (NECI) who claimed the SEO breached their rights and was unconstitutional.

They had argued it made it a criminal offence for them to employ workers on any less favourable terms than others did and represented a significant encroachment on the employers’ freedom to contract.