Status red: the man who helped Ireland ride the storm 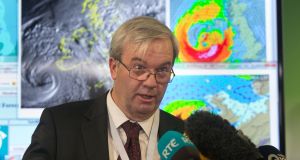 Sean Hogan during a media briefing on Storm Ophelia at the National Emergency Co-ordination Centre in Dublin. Photograph: Gareth Chaney/Collins

Returning to the Custom House from a routine meeting last Wednesday at Met Éireann in Glasnevin, Conor Sullivan, an official at the Department of Housing, Planning and Local Government, was worried.

At a meeting with his boss, Sean Hogan, the director of Fire and Emergency Management, Mr Sullivan told him simply: “There’s something coming up the Atlantic.”

The day before, the US National Hurricane Centre in Miami had alerted Ireland’s weather forecasters to a tropical storm, seated unusually eastwards in the mid-Atlantic and moving north towards Ireland.

The centre has observational jurisdiction over the Atlantic but rarely has anything to tell Met Eireann, even though both are part of the World Meteorological Organisation.

Met Éireann has its own, shorter-range forecasting model, called Harmonie, which digests a jumble of data on temperature, humidity and barometric pressure, mixed with the likely effects of topography.

When the two models were used, and after a Thursday conference call between Glasnevin, Reading and Miami, Met Éireann knew Ireland was facing something unprecedented and that in due course would require unprecedented action on its part.

“Unprecedented is not a word we use often,” says Eoin Moran, director of Met Éireann. “In fact, we debated using it.”

Hogan is also chairman of the National Emergency Co-ordination Group, an interdepartmental and a multi-agency response mechanism to major events.

The group comes under the umbrella of the Department of Defence but has a permanent home, the National Emergency Co-ordination Centre, in the Department of Agriculture on Kildare Street. This is the State’s major emergency team.

Throughout Thursday forecasters sought greater certainty. Hogan and his team watched and waited. How they handled matters thereafter is already being seen as a textbook example of crisis management.

“This is how it is,” Hogan said yesterday in an interview. “This is how our public service can be. I am very proud about what we did on Monday [the day Ophelia struck].”

Meetings can be attended by 50-70 people and rarely last more than an hour.

Crucially, decisions, where they can, are taken and implemented locally. Hands-on implementation by “someone in Dublin with a long spanner” is discouraged, says Hogan.

Throughout Friday county managers were urged to prepare for the worst: “You need to be thinking of your crisis management team and activating local co-ordination,” they were told.

On Friday afternoon Hogan resolved that the national emergency centre would have to meet, a decision he passed to the secretary general of his department, to in turn pass on to his Minister, Eoghan Murphy, and the Government.

Saturday was spent ringing local authorities to drive home the warnings. Met Éireann refined its predictions, then at orange, urging people to be prepared for dangerous weather.

The emergency group met three times, which was itself unprecedented. Met Éireann issued red warnings for parts of the south and southwest, meaning people should protect themselves and stay indoors. Then it took the – again unprecedented – decision to issue a red warning for the entire country.

Inside the co-ordination centre, Hogan chaired meetings, overseeing four constantly changing boards. Each one listed, in turn, the current situation, the key issues, communication strategy and actions to be taken.

“The intent of the system is that it is expert-led – people who know what they’re talking about – but in that room, at different stages, we had the Taoiseach, we had four, five or six different Ministers,” says Hogan.

Most decisions are about co-ordinating local actions. But when decisions need political sanction, such as Sunday’s decision to close schools, they are taken on the basis of a recommendation from the group.

Communication to the public is achieved mainly through one voice – Hogan’s – supplemented by relevant Ministers, such as Eoghan Murphy, Damien English, Paul Kehoe and the Taoiseach himself, and social media.

For merrionstreet.ie, the government information service’s website, the key moment was the decision to close schools. From then on its editor, Nick Callan, used Twitter to the maximum to get the message out.

Callan live-streamed press briefings by Ministers, and by Hogan, attracting up to 10,000 viewers. TwitterGov, with its 2.45 million followers, and other accounts were used to broadcast the message even farther afield.

“You are just trying to help people out,” Callan said yesterday. “Increasingly, this is a platform people have easy access to and you are in a position that you can provide them with information efficiently and quickly.”

As a result of Hogan fronting emergency group briefings, the crisis had a single face and voice, and a consistent message, which was fact and advice-based and devoid of politics.

In due course Hogan and colleagues will review, with key colleagues, how the emergency group performed. After Monday’s meeting he asked the Taoiseach and Ministers present – Murphy, English and Kehoe – what they thought.

“You’re new here,” he said to Varadkar. “Can I ask you, from what you saw happening here, what your thoughts are?”

The ensuing conversation with the Taoiseach lasted about 15 minutes. But as of yesterday, what was said between the two men remained unknown outside the emergency group itself.