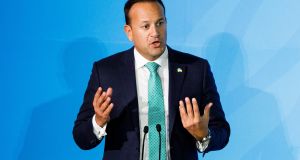 Taoiseach Leo Varadkar at the 2019 Climate Action Summit in New York: “By 2030, we will have prohibited the sale of new petrol and diesel vehicles.” Photograph: Justin Lane

Ireland will pursue a policy of ending fossil fuel exploration on foot of scientific advice about its climate impact, the Taoiseach has announced – though the search and extraction of gas will be permitted for some time as the country transitions to a carbon-free economy.

“In the last week, on foot of a request from me, our independent Climate Change Advisory Council recommended that exploration for oil should end, as it is incompatible with a low-carbon future,” he told the UN Climate Summit.

The Government has been embroiled in controversy in recent months because exploration licences continued to be issued by the Department of Communications, Climate Action and Environment, which environmental NGOs said was not sustainable given the climate crisis facing the world.

The council recommended exploration for natural gas should continue for now, he said, “as a transition fuel that we will need for decades to come while alternatives are developed and fully deployed. I accept this advice and Ireland will now act on it.”

Mr Varadkar confirmed that from next year, all new revenue raised from carbon tax would be ring-fenced to fund new climate action and just transition and cited measures already committed to under the Government’s climate action plan.

He emphasised that a major portion of this additional revenue would go towards a “just transition to protect those most exposed to higher fuel and energy costs and for whom new jobs must be found”. The additional revenues would fund the transformation of transport, electricity, buildings and food production systems.

This would “provide billions” to make change possible – this is separate to €30 billion allocated for climate action under the national development plan.

He confirmed coal would be off the electricity grid by 2025.

“Our renewable electricity will rise from 30 per cent today to 70 per cent in 10 years. By 2030, we will have prohibited the sale of new petrol and diesel vehicles. By then we will have substantially electrified our fleet. All new public buses bought from now are hybrids.”

On land use, Mr Varadkar said Ireland is to plant 440 million trees and “will work with other countries to reform the EU Common Agriculture Policy to shift payments towards farmers who farm in more sustainable and environmentally sound ways”.

On Ireland’s green credentials, he added: “For almost a thousand years, my country, Ireland, has been associated with the colour green . . . In the future, I want Ireland to be known as a green country because of how we respond to the climate and environmental challenges facing our planet.”

Leadership was required to take action, he added, “And I believe leadership is also required to convince people that it is not too late to act.”

On Ireland’s climate record, he said we had already banned fracking.

“We have a climate action fund paid for by a levy on oil. Our sovereign wealth fund has divested from fossil fuels. We will outlaw single-use plastics next and our public sector is already doing so.”

On the leading role Ireland is playing, at the request of UN secretary general Antonio Guterres, on citizen engagement and ensuring greater involvement of young people in climate policy generated by national parliaments, he told the assembly: “We are leading the preparatory coalition on youth and public engagement in the Marshall Islands, Nigeria and Namibia.

“Our new international development policy prioritises those countries who are most vulnerable to climate change – a crisis not of their making – particularly the least developed countries and small island developing states.”

The Taoiseach concluded his three-minute speech by saying he wanted “to replace a climate of fear and anxiety with a new climate of action and opportunity; responding to the challenge of the century with creativity, with imagination and with courage”.

1 Covid-19: Travel restrictions to stay and 'green list' put on hold amid fears of second wave
2 ‘Only a civil servant’ could have come up with ‘unenforceable’ pub regulations
3 ‘Unseasonably' windy weather set to buffet Ireland
4 Bobby Storey: The IRA's planner and enforcer who stayed in the shadows
5 Taoiseach ‘disappointed’ he only learned of Barry Cowen’s driving ban on Friday
Real news has value SUBSCRIBE

Taoiseach ‘disappointed’ he only learned of Barry Cowen’s driving ban on Friday 12:46
‘Unseasonably' windy weather set to buffet Ireland 11:14
Man (21) arrested after shooting at gardaí in Cork city 10:58
‘Only a civil servant’ could have come up with ‘unenforceable’ pub regulations 10:16
Guinness Cork Jazz Fesival cancelled because of Covid-19 10:13