Despite motor lobby opposition, restriction to be introduced on phased basis next year 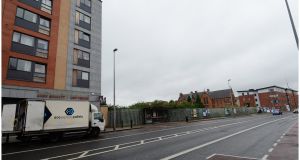 The AA had wanted limits raised from 50km/h to 60km/h on Cork Street in Dublin 8. Photograph: Bryan O’Brien

Plans to cut speed limits to 30km/h on residential streets throughout Dublin city and suburbs have been approved by the city council, despite opposition from motorist lobby group AA Ireland.

The lower limits will be introduced on a phased basis from next year. The 30km/h limit will apply on almost all roads and streets as far as the council’s boundary with the four other Dublin local authorities, excluding “arterial” roads.

The bylaws were made available for public consultation earlier this year and 550 submissions were received with about 170 opposed to the imposition of 30km/h limits.

AA Ireland has described the widespread application of the 30km/h limit as “absurd” and having the potential to undermine road safety. As part of the bylaw consultation process, the AA sought to increase limits on larger access routes to the city, including parts of the city centre which have had a 30km/h limit since 2011.

Council engineers rejected the submissions to raise speeds and said the lower limits were conducive to better driver behaviour. The council’s head of traffic and transport Dick Brady said the overriding principle in relation to a 30km/h default speed limit was road safety.

“It’s in the interest of road safety we would be recommending these new speed limits. We are talking about setting speed limits adjacent to residential areas and school in order to try to ensure the safety of residents and children.”

The recommendation in favour of the 30km/h zones was agreed by councillors on Monday night.

The 30km/h bylaws will be introduced in phases from next March. Under the first phase, the limit will be extended west of the current city centre 30km/h zone to cover most of the streets between the Royal and Grand canals.

The next phase, scheduled for introduction in May 2017, will cover suburbs such as Sandymount, Crumlin, Drimnagh, Raheny and parts of Cabra, Phibsborough, Coolock, Glasnevin and Drumcondra.

Under the final phase, the implementation date of which has yet to be determined, the limit will be extended to the remaining suburbs from the city council border.

The cost of implementing the first two phases is expected to be €350,000.

The AA had wanted limits raised from 50km/h to 80km/h on Conyngham Road, Ballymun Road and Fairview Strand. Limits should be increased from 50km/h to 70km/h on Mourne Road, Drimnagh and Auburn Avenue, Castleknock and from 50km/h to 60km/h on Cork Street in Dublin 8. All these roads were suitable for the higher limits, the organisation said.

In the city centre, including the north and south quays and Dawson Street, the speed limits should be doubled, the AA said, from 30km/h to 60km/h. The current limit was “ridiculous” and added to congestion, it said.