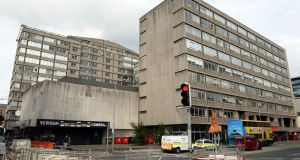 Redevelopment plans for the former Screen Cinema in Dublin would create an “overbearing and imposing mass of office building” and have a negative impact on the new Hawkins House development nearby, the Office of Public Works has said.

Balark Trading is seeking planning permission to demolish the cinema, which closed last year, along with the neighbouring nine-storey former An Post building, College House, and build a 10-storey office and “entertainment venue” complex.

The planned development backs onto the OPW’s Hawkins House, headquarters of the Department of Health, and Apollo House. Permission for the demolition of the two 1960s buildings and their redevelopment with a €50 million office scheme was granted earlier this year.

In a submission to Dublin City Council the OPW said the Balark scheme proposed a “poorly conceived public realm strategy” which would devalue the Hawkins House and Apollo House plans by providing a lesser standard of public space. Balark’s plans for a new pedestrian route were “unappealing and tunnel-like” and the development would jeopardise the creation of a new civic space.

The OPW also complained it would also lose 26 parking spaces which it held a lease over on the Balark lands, and were not provided for in the new plans.

The National Transport Authority has also raised concerns in relation to the Balark development’s impact on future transport plans for the city centre, particularly along Hawkins Street and Townsend Street, which were “likely to become critical bus links under the Bus Connects network review,” it said.

The council’s planning department has told Balark to consult the NTA in relation to its requirements for the site and also to liaise with Transport Infrastructure Ireland in relation to work which would take place adjacent to the new Cross City Luas line, which runs along the side of the old cinema.

In its instructions to Balark, the council’s planning department did not make any recommendations on the concerns raised by the OPW about the impact of the development on the public space or the new Hawkins House scheme.

However it said it “would not support” the provision of an additional 26 car parking spaces sought by the OPW.

The Screen, College House, Hawkins House and Apollo House take up almost an entire city block which the council has long sought the regeneration of under its George’s Quay local area plan.

The plan approved by the council in 2012 was drafted to govern the creation of a new “midtown” for the city south of the Liffey to Pearse Street, and from Hawkins Street to Lombard Street.