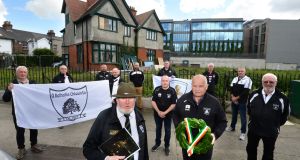 Dublin City Council is to take legal action over the demolition of The O’Rahilly house earlier this week.

The property at 40 Herbert Park, Ballsbridge, in Dublin was the former home of The O’Rahilly, the only leader to have been killed fighting during the 1916 Rising.

Derryroe Ltd, a company owned by the McSharry and Kennedy families, who own the Herbert Park Hotel, last May applied to An Bord Pleanála to develop 105 apartments on the site.

The development was approved by the board on September 8th, despite objections from Dublin city councillors, local residents, 1916 relatives and the O’Rahilly’s grandson Proinsias Ó Rathaille.

The approval from the board was subject to an eight-week period before works could begin, to allow for any legal challenges to the decision.

Despite this, on early on Tuesday, September 29th, the property was demolished, to sharp criticism from TDs and councillors, including Taoiseach Micheál Martin.

On Friday the council issued an enforcement notice over the demolition of the property.

The council said in a statement that the notice “broadly speaking requires the cessation of all works pursuant to the permission on site, until all precommencement conditions and associated submissions have been considered and determined by Dublin City Council. ” It said the penalties for non-compliance include fines or potential imprisonment.

Several days after the apartment development was approved councillors voted for the building to be added to the record of protected structures, due to its historical significance.

Sinn Féin councillor Mícheál Mac Donncha had initially proposed the motion for the property to be given protected status in April 2020.

As part of this process, council officials must inspect the site to determine whether to recommend it be placed on the list of protected structures. The council first wrote to the developer seeking access to the site on April 28th.

Legal firm McCann Fitzgerald wrote to the council on July 1st, on behalf of Derryroe Ltd, requesting council chief executive Owen Keegan confirm within two weeks that the council would not pursue the protected structure process.

The council responded to assert its entitlement to undertake the assessment of the property as a protected structure.

On September 2nd, several days before An Bord Pleanála approved the development, the council sent a second letter seeking permission to inspect the property to assess whether it might be deemed suitable for protected structure status. On September 14th the developer issued a commencement notice for the demolition of the Ballsbridge house.

The council’s report said this notice was validated by its building control office “on the basis of information inputted by the developer”.

The report noted that “this does not allow the developer to carry out works in the absence of complying with relevant planning conditions as set out in the ABP grant of permission”.

McCann Fitzgerald, lawyers for Derryroe Ltd, have been contacted for comment.