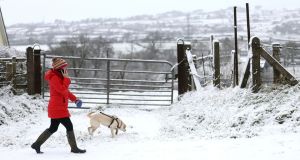 Met Éireann issues a yellow weather warning for low temperatures and ice: A a woman walking her dog in the snow near the port town of Larne, Co Antrim. Photograph: Peter Morrison/AP

Time to double up on your thermals as Met Éireann has issued a nationwide weather warning for low temperatures and icy conditions from Saturday evening.

The national forecaster said there will be “potentially dangerous conditions” as temperatures are set to drop to minus 4 degrees during the night, leading to widespread hard ground frost and icy surfaces.

The yellow alert will come into effect at 6pm until Sunday, 10am.

Looking ahead, the forecaster has warned in general the first week of 2021 is set to be “bitterly cold” with a chance of snow, sleet and rain as temperatures are again to fall as low as minus 4 degrees in the coming days.

Temperatures will struggle to stay above freezing during many of the days during the week with hard frost at night.

Sharp frost and icy conditions will form early on Saturday night as temperatures will fall to minus 4 degrees inland and lingering around freezing along the coasts.

Mist and fog are expected to develop in places with isolated showers in the northern coasts.

AA Roadwatch asked motorists to slow down on Saturday with reports of black ice and slippery conditions in parts of the country.

Frost and ice will be slow to clear on Sunday as the highest temperatures on Sunday will only reach between 2-4 degrees.

Similar chilly temperatures on Monday but it will be dry with sunshine for the midlands, west and north of the country. Some wintry showers will drift further inland in Leinster during the evening.

It is expected to stay cold for the rest of the week with longer spells of sleet or snow at times.