Plugging the gaps: the benefits of retrofitting

The Tipperary Energy Agency’s ‘deep retrofit’ brings home-owners’ energy bills down from €2,000 to €200 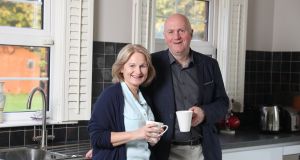 Aileen and Neil Walker retrofitted their timber-frame house in Ballyboughal, Dublin, under the SuperHomes scheme.

The average Irish home is leaky. So leaky that if you were to add up all the tiny holes around windows, pipes and wires and through the attic, there would be a gap the size of a car wheel.

It’s a sobering thought for anyone looking at their heating bill and wondering how they can spend so much trying to heat a home which never feels fully comfortable.

Fixing those tiny gaps is one of the “fixes” that Paul Kenny oversees when the Tipperary Energy Agency undertakes a “deep retrofit” of a home, far beyond anything being done by the majority of home-owners today.

Through overhauls of the home’s insulation, ventilation and electricity supply, bills can be slashed to as little as €200 a year – a remarkable drop from between €2,000 and €4,000 which is spent in many homes.

The average bill faced by home-owners is a little lower than these figures, not because people are thinking green, but rather because they have long accepted there is no point.

“You will hear people say, ‘I only heat the kitchen and the living room’ or they have the stove in one room and that is where the family huddles around in winter,” says Kenny, chief executive of the Tipperary Energy Agency.

The agency is a non-profit “public good” company set up in 1998 to promote energy efficiency and renewable energy, by bringing together builders, labourers and engineers.

Over the past three years, 100 homes have been retrofitted under its ‘SuperHomes’ initiative: “The complicated thing is to bring [people together] into one package where one contract can be written,” Kenny says.

There are plenty of houses to do. In order for Ireland to meet targets for reducing CO2 emissions by 2050, the majority of our homes will need to undergo deep retrofits, he says.

The scale of the problem is linked to the age of the house. One third of Ireland’s homes were built before the 1950s, mainly of solid wall or red brick and are difficult to treat for energy efficiency.

Another third were put up during the 1970s and 1980s, though tens of thousands of them were built with cavity blocks. The final tranche is mainly from the 1990s to 2007.

Once work starts, attic and wall insulation are updated, obviously. So, too, are floors. Boilers are replaced with heat pumps, leaks are plugged, while solar panels are fitted to provide up to a fifth of a house’s needs.

“You need to look at each wall and say ‘what is the most cost-effective, sensible thing to do to that wall or that roof’. It may need a foot of insulation or that boiler needs to be replaced with the heat pump, or is there potential for solar PV.”

Buildings in Ireland are usually not that different, so the explanations to home-owner follow a similar path, but the costs can vary significantly, Kenny tells The Irish Times.

A small house built after the turn of this century could typically cost €20,000 to upgrade, while an older, larger house needing new windows and heating could cost €70,000.

However, it works. In Templemore in Co Tipperary, one woman told the agency she paid €3,000 a year in heating bills, yet she still could not use two rooms during the winter because they were so cold.

Following the retrofit, however, her bills were reduced to between €500 and €600 a year. After Government grants, the average payback time for the investment is eight years, Kenny says.

This year, the Tipperary agency will “fix” 80 homes. It is, he accepts, a small number given the number that must be worked on: Will it be a hard sell to get the vast majority of people?

“Yes, it will. However, if you get the numbers to make sense through various policy instruments, taxes and subsidies, you get the knowledge right so that people know what it is like to be in a warm house – I don’t think it is that hard a sell.”

Neil and Aileen Walker are one couple who were happy with the experience. They retrofitted their timber-frame house in Ballyboughal, which was built in 1995, for about €20,000.

The pair had struggled to heat the home properly and wanted to replace their oil boiler. Under the SuperHomes scheme, they fitted the house with solar panels.

The payback takes about a decade but the couple say they have now effectively added another room to their home as the kitchen is being heated properly.

It is stories like this which Kenny hopes will move others towards retrofitting. “People don’t want to be cold and if they can afford not to be cold, they will invest,” he says.