Bill banning Israeli settlement goods to be opposed by Government 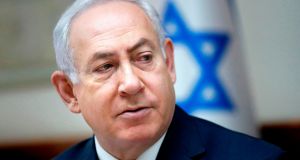 Israeli prime minister Binyamin Netanyahu: when the Bill was last tabled, he summoned the Irish Ambassador to Israel to hear his objections. Photograph: Thomas Coex/AFP/Getty

A Bill which would prohibit imports from Israeli settlements in the Palestinian territories will be opposed by the Government this week, but campaigners are optimistic that it will have sufficient votes to pass when it reaches the Seanad on Wednesday.

The Control of Economic Activity (Occupied Territories) Bill 2018, a private members Bill proposed by Independent Senator Frances Black, will make it illegal to purchase goods and services from Israeli settlements in the occupied Palestinian territories if passed by the Oireachtas.

Last week, Fianna Fáil decided to support the Bill, and the party’s foreign affairs spokesman Niall Collins confirmed on Monday that Senators would vote in favour of the Bill. Fianna Fáil has been heavily lobbied against the Bill by the Minister for Foreign Affairs Simon Coveney.

I’ve always been very supportive of the Frances Black Bill. Ireland needs to do more for the Palestinians

The Government is expected to oppose the Bill, though Independent members of Government have previously expressed their support.

Independent Minister Finian McGrath said on Monday he would be “urging Cabinet members to support the Bill”.

“I’ve always been very supportive of the Frances Black Bill,” Mr McGrath said. “Ireland needs to do more for the Palestinians.”

A spokeswoman for the Independents in Government was unable to say what the position of Minister for Transport Shane Ross was on the issue.

Mr Ross and Mr McGrath previously expressed support for the Bill. However, Mr Coveney has made clear that the Government will oppose the Bill.

The Attorney General has advised that because trade is an EU competence, individual EU member states cannot impose trade bans unilaterally, sources say, though campaigners have commissioned two legal opinions which disagree. They say that EU states can make an exception if it is a matter of public policy. The Bill, which is supported by other Independent Senators and Sinn Féin, was tabled six months ago but was paused at the request of Mr Coveney.

However, Ms Black is now seeking to make progress with the Bill before the summer recess, and political sources said they expected the Bill to pass, despite Government opposition.

When the Bill was last tabled, the Irish Ambassador to Israel was summoned by prime minister Binyamin Netanyahu to hear the Israeli government’s objections. However, speaking in the Seanad then, Mr Coveney was sharply critical of the Israeli settlements and said the Government shared the objectives of the Bill to pressure Israel to withdraw from the settlements.