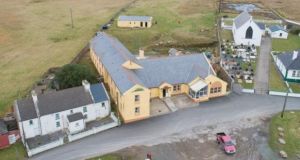 An estate agent has blamed Brexit, an increase in VAT rates and poor publicity for a failure to sell an island hotel off the coast of Co Donegal.

A number of outside parties expressed a strong interest in buying the 14-bedroom Óstan Thóraigh, or Tory Island Hotel, which had a price tag of €400,000.

They included a hotelier from Belgium, a retired couple from Dublin and a US-based priest who wanted to turn the hotel into a retreat centre.

However, the estate agent handling the sale, Gareth McLarnon of Glenn Estates, said the owners had not received “a satisfactory offer” by the closing date of August 31st.

“All those interested in buying the hotel were from outside of Donegal and the general area, and they would have been swayed by a number of factors,” Mr McLarnon said.

“I think the uncertainty over Brexit has to be a major factor. Also the increase in VAT rates for hotels and the hospitality industry from 9 per cent to 13.5 per cent has certainly not helped.

“Recently there has been some negative publicity about the numbers of visitors coming to Donegal being down so I think those considering buying the hotel who are from outside the area will have been moved by this also.”

The hotel, the island’s biggest employer, continues to be owned by Tory’s former lighthouse keeper Sean Doherty and his family.

“The hotel will remain for sale and hopefully someone will buy it and continue to run it successfully,” Mr McLarnon added.

The business dates from the late 1800s, when the Ward family operated the hotel and a general store, supplying everything from salted fish to the marine chandlery. Roger Casement once stayed at the hotel and Easter Proclamation signatory Joseph Mary Plunkett sent a postcard from the hotel on his second visit to the island in 1914. He wrote that he did not stay in the hotel, however, as Mr Ward was “very sombre”.

The only access to the island is by ferry, and each crossing takes around an hour.