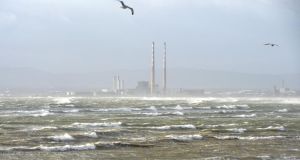 Households received leaflets informing them of the plans to dump waste in Dublin Bay after concerns the move may go all but unnoticed. File photograph: Alan Betson/The Irish Times

Thousands of households have received leaflets about plans to dump 10 million tonnes of dredge waste in Dublin Bay, following concerns the application was publicised at a time when few might see it.

It subsequently filed a Dumping at Sea (Das) permit application with the Environmental Protection Agency (EPA) to allow 9.7 million tonnes of seabed material to be disposed of at an existing marine site off Howth Head, by-product of increasing the depth in the port from seven to 10 metres.

However the timing of the single newspaper advertisement required by law to notify the public, at the start of the August bank holiday weekend, has led to concerns the move would remain all but unnoticed.

The Irish Underwater Council (IUC), the governing body for sub-aqua sports, told the EPA that while the advertisement was in compliance with procedure, “the company appears to have acted in a deliberate, pre-meditated and cynical fashion to drastically reduce the time available for third party submissions”.

Third parties have one month from the date of the advertisement to file submissions.

The IUC argued the use of newspaper notices in this regard was a “somewhat archaic practice” and inadequate as a means of disseminating important information.

There have been no other submissions, although they can be filed until August 31st. The DPC, which declined to comment, is in full compliance with the application process.

Fine Gael election candidate for Dublin Bay North Stephanie Regan has distributed 20,000 leaflets to households along the north coast in a bid to ensure the application is well flagged.