A total of 79 trees across the State were infected with the disease in 2015, which means 195 ash trees have become infected since October 2012. Photograph: David Jones/PA Wire

The number of confirmed findings of Irish trees infected with ash dieback disease, a relatively recently discovered fungal disease, has increased by 68 per cent or more than two-thirds over the past year.

The Department of Agriculture, Food and the Marine said there were 56 confirmed findings of the disease in ash trees in forestry plantations over the past year, bringing to 110 the number of confirmed infections in the plantations since October 2012.

Between October 2012 - when the first case was confirmed in Ireland - and the end of 2014, there were 54 confirmed findings of trees with the disease in forestry plantations.

The soft and pliable natural fibres of ash wood are most famously used for making hurleys.

Chalara fraxinea, more commonly known as ash dieback disease, was first noted in Poland in the early 1990s but was not given a name until 2006.

The disease can affect ash trees at any age and eventually can kill the tree. Trees under 10 years of age are more susceptible to it. A new, more harmful, strain of the disease was discovered in 2010. 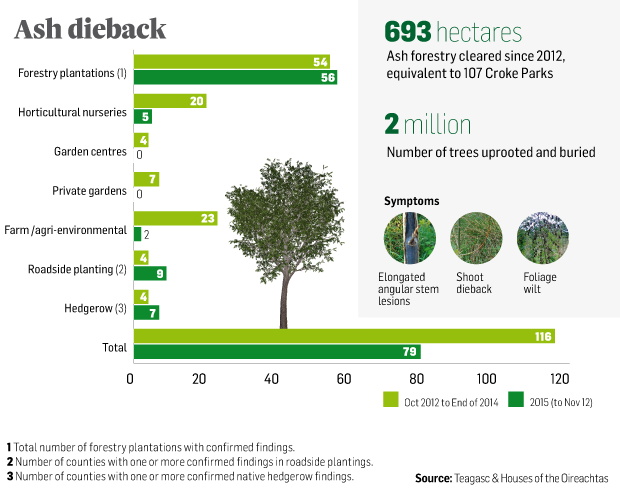 Plants with the disease which were imported from European countries have caused the fungus to spread to Irish ash trees. Wood, including firewood, is also responsible for its spread.

The latest data from the Department of Agriculture confirmed that as of November 12th last, the number of trees suffering from the disease had risen in Irish forestry plantations, horticultural nurseries, roadside plantings, hedgerows and farming and agricultural environmental plantings.

A range of symptoms are associated with the disease, including corrosion and abnormal marks on the bark or branches, wilting foliage, brown/black discolouration at the base and in the middle of leaves and brown/orange discolouration of the bark.

The first Irish case of the infection was discovered in October 2012 in a young forestry plantation in Co Leitrim which had been planted using imported trees. All trees on the site were destroyed, as well as trees in 10 other sites where the same batch had been planted.

A ministerial order was introduced in November 2012 to restrict the movement of ash plants and seeds in Ireland, according to the Department of Agriculture.

Mick Power from Coillte said the State forestry company was working closely with the Department of Agriculture and the Forest Service to monitor and control the spread of ash dieback.

After the first case was identified in Ireland in 2012, Coillte decided to halt the planting of ash in Coillte forests, replacing it with other broadleaves such as sycamore, alder, birch, oak and beech, said Mr Power.

“We also take a leading role in the Ireland Ash Society, working with stakeholders to find a long-term solution to the prevalence of the disease and with the Hurley Maker’s Guild to ensure a consistent supply of ash is available for hurley making,” he added.

The Department of Agriculture is calling on forest owners, forest nursery staff and members of the public to be vigilant and report any sites where there are concerns around the health of ash trees. The department also recommends that people take photos of trees which may be infected.

What can the COP26 climate summit achieve?

4 Thousands attend rallies in Irish cities in solidarity with Palestine