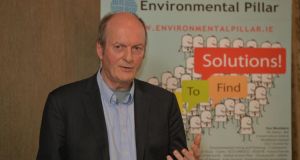 Michael Ewing, Coordinator of the Environmental Pillar group: ‘There is a clear and urgent need for a sense of direction and understanding as to how Ireland will take action to aggressively respond to the imminent threat of climate change’. Photograph: Alan Betson/The Irish Times

The progressive recommendations of the all-party climate committee must be used by the Government “to develop a real and lasting strategy to turn Ireland from laggard to leader on climate action”, according to a coalition of environmental organisations.

Measures to protect biodiversity and recognition of the role of a healthy environment in tackling climate change contained in the committee’s report launched on Tuesday were “warmly welcomed” by the Environmental Pillar (EP) – it represents more than 30 national environmental organisations.

The critical recommendations welcomed by the EP were:

“If adopted by the Government, these recommendations could help clear the decks for the State to forge a climate action plan for the following decades that puts Ireland on track to do our fair share to meet our climate commitments,” it added.

“There is a clear and urgent need for a sense of direction and understanding as to how Ireland will take action to aggressively respond to the imminent threat of climate change in line with our Paris Agreement commitments,” said EP coordinator Michael Ewing.

The Government has conceded current policies and measures were not working and a reset was needed, “clearing the decks for the work of this committee and its important recommendations recognising the vital role that a healthy environment can play in controlling our emissions”, he added.

In the face of the global climate emergency and Ireland’s failure to act to date, “we see this committee’s recommendations as the opportunity to usher in a new era of climate action”, said Charles Stanley Smith of An Taisce. “In particular, we welcome moves to protect our carbon and biodiversity rich peatlands.”

IFA President Joe Healy said a Teagasc plan endorsed by the committee was the basis for further climate action in agriculture, and was “far better than the unrealistic proposals put forward by the Citizens’ Assembly, which included an unjust and inequitable tax on Ireland’s carbon-efficient food production model”.

The proposed increase in carbon tax would, however, impose significant costs on farm families and rural communities who did not have alternatives.

If the horticulture sector was to develop as proposed, it needed policies to make it robust and sustainable. “To date, the Government has failed to regulate against unsustainable discounting and to appoint an independent retail regulator to police the grocery market.”

He described proposals to divert CAP funds to address the climate challenge as “a convenient side-stepping of the need for a robust national climate action budget”.

IFA environment chairman Thomas Cooney said agricultural emissions were significant, but reflected the importance of the sector to the national economy. “While agriculture’s emissions have declined by 1 per cent since 1990, emissions from sectors such as transport are spiralling out of control, increasing by 133 per cent. Despite this, farming continues to be a scapegoat for climate inaction in other sectors.”

To secure a just and sustainable climate transition, future climate measures must lead to improved farm level profitability, he added.