Vehicles will use variety of technologies designed to reduce carbon emissions 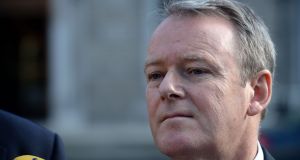 Sinn Féin TD Brian Stanley said the take up of consumer electric vehicles was at “a snail’s pace” and that the issue of “range anxiety” was a major disincentive. Photograph; Dara Mac Dónaill / The Irish Times

“Green” buses will be tested on routes in Dublin and Cork from next month as part of plans to drastically cut carbon emissions in the public transport fleet.

Up to 14 test vehicles will be used in the two cities and data gleaned as a result will help guide procurement approaches from next year.

The pilot phase will focus on hybrid technology with the prospect of fully electric buses further off.

An Oireachtas Climate Action Committee hearing on Thursday was told a range of technologies will be tested over a 14 week period including fully electric, diesel-electric hybrids, and compressed natural gas.

Tail pipe emissions will be measured to assess CO2 emissions and air quality effects with data likely to become available from early next year.

However, despite such efforts, the Committee heard that transport emissions are likely to increase in the coming years rather than fall in line with critical carbon reduction targets.

Secretary General of the Department of Transport Graham Doyle said this is due to a combination of increasing employment, an improving economy and growing population.

The Committee is due to report on the country’s green performance and approach in January but in the context of a dubious performance to date. Last July, the Climate Change Advisory Council said Ireland cannot meet targets to cut greenhouse gas emissions by 2020 and is off the course on other deadlines.

In his opening statement to the Committee Mr Doyle said Environmental Protection Agency (EPA) projections indicate that, “without intervention, transport emissions could rise between 2020 and 2035, not fall”.

“Projections for our 2030 prospects are sobering,” he said, explaining that steps being taken to reduce carbon in the transport sector were being eroded by consumer behaviour.

“All these efforts are currently being cancelled out by rising demand. Each transport trip now is less emitting than ever before. Nonetheless emissions are rising,” he said.

“Every year demand for trips to work, education, shopping, leisure and social interaction rise as population and employment grows.”

While public transport accounts for less than 5 per cent of transport emissions generally, efforts are being made to reduce its contribution. There are plans to convert 500 buses into low emission vehicles by 2023. From next July, the State will no longer purchase diesel only buses for its urban fleets.

The transport sector is the third largest for emissions and saw carbon output grow by 4 per cent last year.

Sinn Féin TD Brian Stanley said the take up of consumer electric vehicles (EVs) was at “a snail’s pace” and that the issue of “range anxiety” - relating to the distance electric cars can travel before needing to be recharged - is a major disincentive.

He also said that Holland had in the region of 20,000 more charge points for vehicles than Ireland.

Fianna Fáil’s Jack Chambers said that in Norway a far higher proportion of cars sold are electric. “We are way behind what other countries are doing in this space,” he said.

Mr Doyle conceded that range anxiety was a “really significant issue” but that technology was constantly improving.