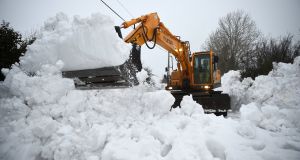 A digger clears snow from a road in Kilteel, Co Kildare on Monday. Photograph: Reuters 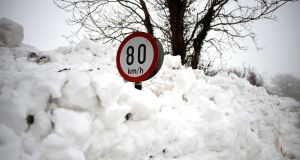 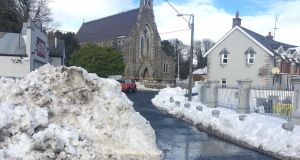 Snow in the village of Roundwood in Co Wicklow on Monday. Photograph: Tim O’Brien 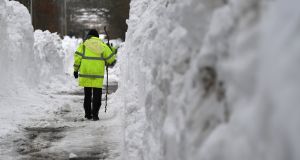 A farmer makes her way through heavy snow in Blessington, Co Wicklow on Monday. Photograph: Reuters 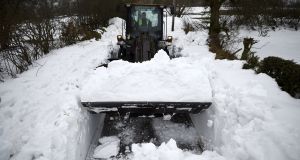 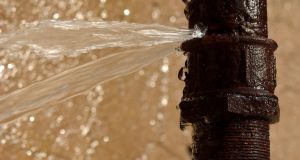 Irish Water is dealing with a large number of leaks caused by the extreme weather, as well as increased usage across the system. Water restrictions are in place in many areas to conserve supplies.

The Government will fund the “exceptional and unbudgeted” costs local authorities ran up reacting to the severe weather and heavy snow last week, following a memo to Cabinet.

As things begin to return to normal, local authorities will start taking stock of the damage caused to infrastructure, in particular the road network.

Minister for Housing and Local Government Eoghan Murphy will bring an estimate of the long-term repair costs to Cabinet in the next number of weeks, Mr Hogan said.

A status yellow snow and ice warning remains in place for Leinster until 10am on Wednesday.

Restrictions on water supply are in place across the Dublin region and neighbouring counties from 8pm Tuesday until 6am on Wednesday in order to reduce pressure on reservoirs.

Irish Water warned it would be reducing water pressure overnight “for the foreseeable future” in the capital.

A large number of leaks caused by the extreme weather, as well as increased usage across the system, has put the network under strain.

There are about 39,000 households whose water supply is restricted and 23,000 who have no access to water, Irish Water said on Tuesday evening.

Dublin is currently drawing down 28 million litres more water than treatment plants can supply. Overnight water restrictions will be in place until the deficit is reduced, and the reservoir stores of water return to normal levels.

Irish Water have teams looking at how to refine the restrictions on Tuesday night, so particular areas are not affected more than others. Restrictions will be worse for households on higher ground, or on the edges of the supply network.

Some 14,000 people are on storm-related boil water notices; more than 11,000 are in Enniscorthy, 1,900 are in Aughrim, Co Wicklow, and the remainder are on small schemes in Waterford.

Customers are being asked to conserve supplies where possible and restrictions will continue for days, possibly weeks, Irish Water’s general manager, Eamon Gallen, said. Supply to hospitals is being prioritised.

He added that Irish Water was reviewing the situation “on an hourly basis”, working with the four Dublin local authorities in a bid to limit disruption.

“We will probably have to introduce restrictions for a number of weeks, if not months, to come.

“But we will try and minimise the impact on customers by doing them out of hours at night, where possible, and generally people will not be affected.”

A Do Not Drink Notice has been issued with immediate effect due to contamination of the source supplying the Fethard PWS in Tipperary, after a major spillage of kerosene oil.

An oil tankard spilled into a river and contaminated the treatment plant, which will now have to be shut down for more than a week.

While the notice is in place, tap water should not be used for drinking, food preparation, washing or cooking of food, brushing teeth or making ice.

“We ceased production immediately at the treatment plant in the area, we now have specialist contractors on site doing a deep clean, trying to bring the treatment process back into operation,” said Duane O’Brien, the regional operations manager for Irish Water.

“On the advice of the HSE we’ve issued a Do Not Drink Notice on the supply. We are providing an alternative water supply at a number of locations within the area. It may be a matter of weeks before we can fully restore supply.

“Clean up is a specialist process, we’re on site at the moment looking at our options, trying to find the quickest way forward, we’ll be talking to the HSE later today on our options.”

Outpatient appointments have returned to normal across the health service, but there is still a large backlog in discharging patients from beds.

Staff members who worked through the severe weather will need “periods of rest” over the coming weeks, which will effect services, Mr Lawlor said.

The health service expects a surge in emergency department admissions for trips, slips and falls over the next number of days, as people begin moving outside again on roads that may have lingering snow and ice.

The status orange snow and ice weather warning for Leinster was lifted at 10am on Tuesday, but the status yellow warning remains in place and there is fear that thawing snow may lead to localised flooding.

Road conditions are gradually improving. However, snow and ice remain an issue on secondary and local routes in Kildare, Wicklow and Wexford. Road users are advised to stick to main routes as secondary routes and hills are still impassable in places.

Gardaí also reported that fog was lingering around Cork, with patchy fog between Carrick-On-Suir in Co Tipperary and Mooncoin in Co Kilkenny.

Rural and upland parts of Leinster still have significant drifts of snowfall yet to thaw, compared to the rest of the country, Met Éireann weather forecaster Joan Blackburn said.

Iarnród Éireann announced on Tuesday morning that full service has resumed on all Intercity, Dart and Commuter lines, and thanked its staff for their hard work during the storm.

Dublin Bus also resumed their normal timetable today, but warned customers that there may be delays.