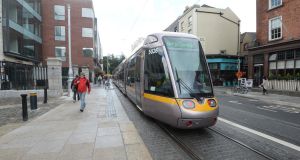 The Luas Cross City network may be less than 6km in length but it comes with considerable environmental benefits for people who live or work in Dublin – and for those visiting the capital.

The new line marks another significant shift to public transport in the city which brings a notable reduction in carbon emissions, which contribute to global warming.

“The Luas is entirely powered by electricity, a growing proportion of which is coming from renewable sources in Ireland. Therefore, any shift in numbers travelling by car or bus using fossil fuels to trams results in reduced carbon emissions,” explained Neil Menzies environment and sustainability manager with Transdev which operates the Luas for its owners Transport Infrastructure Ireland (TII).

The air quality assessment included with the environmental impact Statement (EIS) for the project predicted that with the line operational from this weekend there would be a 17 per cent reduction in CO2 emissions across the entire new element of the extension.

Within its city centre section, it was predicted that there would be a 24 per cent reduction in CO2 emissions – because of greater numbers moving to public transport.

In relation to nitrogen dioxide and particulate matter (PM10) – the most noxious emissions associated with vehicular traffic – the EIS air quality assessment predicted that there would be reductions achieved in pollutant concentrations across a number of the city centre streets traversed by the new line.

Air pollution is believed to be the biggest factor in 400,000 pollution-related deaths in Europe every year, according to Dr Francesco Pilla of UCD School of Architecture, Planning and Environmental Policy – and most air pollution deaths are due to traffic emissions.

As co-ordinator of a major EU project (iSCAPE) to counter air pollution in cities, he has watched the development of the Luas and the cross city project with interest – iScape is developing “greening” strategies with use of hedges and trees to help keep pollutants away from people in urban areas.

“LCC creates the potential to reduce emissions in city. It translates into less people in cars. We will only know the extent of reduced emissions when it is fully operational,” he said.

The business case projected that the line would reduce the number of car trips by three million per annum. This is based on projections in 2009. An “updated detailed business case” stated there would be 400,000 fewer trips per annum relating to peak traffic periods.

The Luas moves over 34 million passengers every year, and the new line will increase this by another eight million predicted passengers.

It will operate in new areas of the city and provide residents with new options for travelling to the city centre.

“The connections at Marlborough/Abbey and O’Connell/Abbey will allow people far greater ease of movement around the city and new access routes to retail and business areas,” Menzies added.

Use of renewable energy

In addition, as TransDev and TIF are committed to providing a long-term sustainable transport option for Dublin, use of renewable energy options are constantly being assessed, including the potential of solar power.

“These will most likely be used in such areas as maintenance depots and offices,” he said.