Lit up Poolbeg stacks could be ‘as beautiful as Eiffel Tower’

Dublin-centric prints and textiles have moved beyond tack to beautiful design. Here we speak to Clare Grennan of Irish Design Shop, Rubio of Hang Tough Framing and Kate Ó of RetróEire about this trend of industry as art. Video: Kathleen Harris 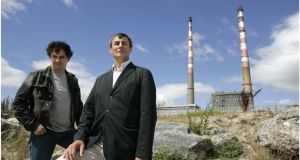 There was a victory for the Poolbeg chimneys this week as councillors added them to the protected structures list amid demolition fears, but what next for Dublin’s iconic stacks?

Sculptor Patrick O’Reilly has reignited his proposal to illuminate the 207 metre tall Pigeon House chimney stacks to turn them into Dublin’s version of the Eiffel Tower.

Mr O’Reilly has been “enchanted” by the candy-striped towers for a long time. He believes they could be “as beautiful” as Paris’s famous tower which was enhanced by Pierre Bideau with the use of 20,000 special “twinkling magical” strobe lights.

“They have a magical effect being so close to the water. The lights would deflect not only in the water but in the sea fog ,” says Mr O’Reilly.

He proposes illuminating the upper two thirds of the chimneys, with the uppermost part being a “solid mass of white light”.

As with the Eiffel Tower, they could be lit for 10 minutes per hour from lighting up time until 1am and the lights would not be visible during the day.

He believes installation would be “relatively straightforward” as the chimneys already have ladders down the sides and cables would be thin and unobtrusive and bulbs small.

The State’s finances have changed since he first mooted this idea in 2006 at an estimated cost of €1m. However, Mr O’Reilly said in the past projects such as the Statue of Liberty, given by the French people to the US, were paid for by small donations from the public.

The technology has already been developed for the Eiffel Tower and long life bulbs mean they would not need an “army of people” to repair them, he said. Alternatively just one tower could be lit up, he said.

Mr O’Reilly has wanted to do a project with the chimney stacks for many years. He first brought his idea to public attention in 2006 when Bideau lighting general manager Bertrand Chiron came to Dublin to visit Mr O’Reilly and viewed the site.

Eight years later the plant been decommissioned and the towers have been protected and he still believes the proposal would work. He wants the chimneys to be “transformed into a beacon of beauty” and allow them to take their place in the landscape.

If illuminated, the stacks - which are almost 90m taller than the Spire - could be seen all along the coast from Howth to Dalkey and beyond, he said. They would be visible on the long winter evenings, and in the fog and could be lit for special occasions.

Concern over the future of the chimneys arose last week when the ESB warned it may have to demolish the towers. ESB chief executive Pat O’Doherty said carrying out the structural and repair works needed to keep the 207m (680ft ) twin stacks may not be the best use of resources.

However,Dublin City Council agreed on Monday to add the redundant chimneys to the Record of Protected Structures (RPS).

Council chief executive Owen Keegan told councillors on Monday night the ESB could not demolish the chimneys without planning permission. He said that he had received confirmation from Mr O’Doherty that “nothing will be done to the chimneys without consultation with the city council”.

The old power station in Poolbeg ceased operation in 2010 and, in a letter to Minister for Tourism Leo Varadkar, Mr O’Doherty said a review of the site, currently under way, will be completed by the end of the year.

Another idea floated earlier this week was transforming them into the Dublin Sky Bridge. Earlier this week. Dún Laoghaire-based designer Michael Ó Mara said the chimney stacks could be transformed into a major tourist attraction by wrapping them in spiral ramps and creating a “sky bridge” between the two towers.